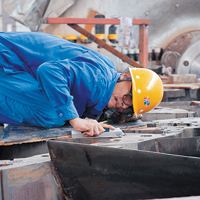 The shoe is on the other foot now. Having protested restrictions on labour mobility for long, the government is now squirming as Indian firms want their Chinese contractors to bring along their supposedly more efficient construction workers here to finish jobs better and quicker.

The denial of temporary work visa for 144 construction workers from China to do the specialised job of erecting a glass wall at the Indira Gandhi International Airport in Delhi is unreasonable if not protectionist. The labour ministry has been shouting hoarse for some time about the influx of Chinese workers who work on steel and power projects that Indian firms have contracted to Chinese vendors. The reason: the famed speed and thrift of the Chinese.

A section of the Indian media is also doing its bit to whip up xenophobia as it highlighted the Chinese connection with the fallen chimney at Balco's power plant at Chhattisgarh even though the chimney job had been sub-contracted by the Chinese contractor to an Indian company.

Whether the Chinese workers are more skilled than Indian construction workers or whether their work ethics are better is debatable. But what is beyond debate is the freedom of a business to hire the best men and women for a job.