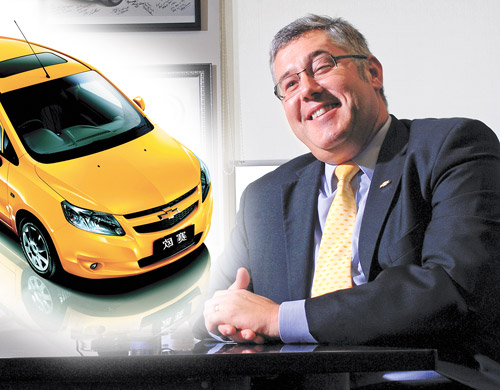 But now GM, like other new players, has plans to capture 10 per cent of the Indian auto market in the next four years, and hopes that the GM-SAIC deal will help it do that. "We should be able to register a growth of about 30 per cent this year if the present growth momentum is sustained," says Slym.

"GM was keen to grow its share of the Indian market, so it decided to partner with SAIC, which brought in the much needed financial investment that GM needed in India," says Ammar Master, senior analyst at J.D. Power Asia Pacific, in Bangkok. When the two companies tied up, GM was bankrupt in the US and desperately needed a partner to invest in its Indian operations. The tie-up with SAIC was fortuitous.

New Offerings
By introducing a "people's car", a van and an LCV, GM plans to compete in every segment and price range in India.

The Indian auto market's peculiarity is that 73 per cent of the market is held by Maruti Suzuki, Hyundai and Tata Motors — together they sold more than 1.8 million cars in 2010-11. Usurping their position is not on the cards. But Tata Motors' 14 per cent and M&M's 7 per cent market share is what GM, Ford, Toyota and VW are all aiming at. "India is going to be the largest hatchback market. All companies will focus on offering value to the customer with maximum localisation," says Kapil Arora, head of the automotive practice at Ernst & Young.

This is where the GM-SAIC tie-up will come in handy for GM India. It will introduce a hatchback from China, which will compete with the likes of the Ford Figo, Maruti Suzuki Swift, Tata Indica and VW Polo. "Low pricing is the key and that is where GM hopes its new cars from China could play a vital role," says Shrawan Raja, managing editor of indianautosblog.com, which tracks new car performances.

The hatchback developed by GM-SAIC's R&D centre in China and sold there as ‘Chevrolet Sail' is likely to be introduced in India with a 1.2- or 1.3-litre diesel engine. The Sail hatchback is like a mini GM Sonic. Sail's popular sedan version sold in China will also be launched in India to take on Toyota's Etios.

break-page-break
GM, which has invested more than Rs 5,000 crore in India till date, recently set up a 160,000-unit engine plant at Talegaon, near Pune. Industry insiders speculate that Fiat's diesel engines made at this plant could be used in Sail.

The SAIC cars will be sold in India by the same set of GM dealers selling popular brands such as Beat. GM also plans to introduce more models, which it hopes will allow it to grow by at least 20 per cent year-on-year. "Product upgrade will happen as fatigue sets in for any product after some time. We believe in introducing the latest and upgrading products at regular intervals to keep the market excitement alive," says Slym. For instance, a Euro-IV Tavera will be introduced by August-September.

"The Detroit carmaker's success can be attributed to its new product strategy. European designed models with the latest global platforms have replaced those of Korean Daewoo," says Jenny Gu, senior analyst at J.D. Power Consulting, Asia, in Shanghai.

Last year, Beat notched up reasonably good sales. GM is ready to launch a 1-litre Beat diesel version in a month or two. An electric version of Spark is also ready for launch. LPG Beat and Spark have already been introduced in some markets and form 10-12 per cent of the sales in those markets. The company is trying to lower the running costs of its vehicles.

Meanwhile, SAIC also has its eyes set on the A2 segment, which includes Alto and sold more than 808,000 cars for Maruti Suzuki last year. It is also working on an 800-cc small car.

The GM-SAIC tie-up will also introduce two vans and an LCV in India. One of the most popular multi-purpose vehicles (MPVs) in China — Hongguang — will be launched in India with a 2-litre diesel engine, and its smaller cousin, Hongtu van, will come with a 1.2- or 1.3-litre diesel engine. These vehicles will compete with MPVs such as Mahindra Xylo and Toyota Innova, and Maruti Ecco. They are expected to be priced below Rs 11 lakh.

The LCV will be produced at the Halol plant in Gujarat, which currently manufactures Spark and Aveo. The plant's capacity is being increased from 85,000 to 110,000 units. The LCV market is currently dominated by Tata Motors with sales of more than 150,000 units per year. GM is also keen to launch the utility vehicle Wuling 300, manufactured by China-based Wuling Automobile. The sub-one tonne truck will compete with Tata Ace, Tata Magic, Mahindra Maxximo and Mahindra Gio. These commercial vehicles may be sold here under a new brand by new dealers.

Importing A Winning Formula
In China, the GM group is the fourth-largest automobile company and also the largest foreign automobile company with brands such as the locally produced Buick, Chevrolet and Cadillac and the imported Opel, Hummer and GMC. It recorded 1.1 million units in light vehicle sales in 2010, up 42 per cent from 2009.

GM now hopes it can repeat this success in  India. While Beat has done well thanks to its competitive pricing and modern styling, others such as Aveo (A3 segment) and U-VA (A2 segment) have not fared as well, even though the segment grew 14 per cent year-on-year. According to data from Society of Indian Automobile Manufacturers (Siam), sales fell from 3,793 units in 2009-10 to 3,586 in 2010-11. GM may revamp these models.

This financial year has not started too well for GM. While Spark performed marginally better (it sold 3,887 units in April 2011-12, compared to 3,503 units in April 2010-11), Beat and U-VA sales dropped 40 per cent. But Beat diesel may rev up things. "The overall market has slowed down due to hike in interest rates, fuel prices, inflation and commodity prices," explains Slym.

For GM to succeed, it is essential that the new Chinese cars are accepted well here. Pricing will be their advantage. GM is already marketing its products aggressively, offering a three-year warranty on all its cars. (Tata Motors offers a four-year warranty for Nano, but not for all its cars). GM also plans to open 70 more dealerships by the end of 2012, up from 235 now. But to compete with Tata Motors, it has to be at least 600.

Not only GM, but competition, too, is gearing up. In little over a year, VW has invested Rs 4,800 crore and opened 70 dealerships. Ford plans to bring in eight new vehicles by 2015. Toyota has revived itself with Etios, and has increased capacity to 150,000 units per annum.

A success story in India will depend a lot on whether SAIC's vehicles ‘Sail' through India.