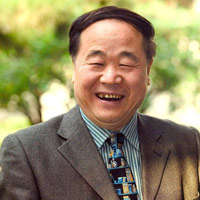 Mo, who was once so destitute he ate tree bark and weeds to survive, is the first Chinese national to win the $1.2 million literature prize, awarded by the Swedish Academy.

He said the award made him "overjoyed and terrified".

Some of his books have been banned as "provocative and vulgar" by Chinese authorities but he has also been criticised as being too close to the Communist Party.

While users of a popular Chinese microblogging site offered their congratulations, dissident artist Ai Weiwei said he disagreed with giving the award to a writer with the "taint of government" about him.

Mo, 57, who grew up in the town of Gaomi in Shandong province in the northeast of the country and whose parents were farmers, sets his works mainly in the land of his birth.

Mo Yan is a pen name which means "Don't Speak". His real name is Guan Moye and he was forced to drop out of primary school and herd cattle during China's Cultural Revolution.

Speaking to the state-run China News Service, Mo said he was happy to have won.

"But I do not think that my winning can be seen as representing anything. I think that China has many outstanding authors, and their great works should also be recognised by the world.

"Next, I'm going to put most of my efforts into creating my new works. I will keep working hard, and I thank everyone. As to whether I go to Sweden to receive the prize, I will wait for word from the organisers about arrangements."

"At Home With His Dad"
Peter Englund, head of the Swedish Academy, said Mo was "at home with his dad" when he was told of the award.

"He said he was overjoyed and terrified," Englund told Swedish television, adding:

"He has such a damn unique way of writing. If you read half a page of Mo Yan you immediately recognise it as him."

The award citation said Mo used a mixture of fantasy and reality, historical and social perspectives to create a world which was reminiscent of the writings of William Faulkner and Gabriel Garcia Marquez.

At the same time, he found a "departure point in old Chinese literature and in oral tradition", the Academy said.

Englund said Mo offers "a unique insight into a unique world in a quite unique manner."

Mo is best known in the West for "Red Sorghum", which portrayed the hardships endured by farmers in the early years of communist rule. His titles also include "Big Breasts and Wide Hips" and "The Republic of Wine".

The last Chinese-born winner was Gao Xingjian in 2000, although he was living in France by that time and had taken French citizenship. His Nobel was not celebrated by the Chinese government.

China Has Waited Too Long
Communist Party mouthpiece the People's Daily praised the win in a commentary on its website (www.people.com.cn).

Mo, a vice chairman of the government-backed Chinese Writers' Association, said he had nothing to say about Liu Xiaobo, the jailed dissident who won the Nobel Peace Prize in 2010 and whose name has been banned from public discussion in China.

"His winning won't be of any help for Liu Xiaobo, unless Mo Yan expresses his concern for him," said Ai Weiwei.

"But Mo Yan has stated in the past that he has nothing to say about Liu Xiaobo. I think the Nobel organisers have removed themselves from reality by awarding this prize. I really don't understand it."

Beijing-based writer Mo Zhixu said Mo Yan, who once copied out by hand a speech by Chairman Mao Zedong for a commemorative book, "doesn't have any independent personality."

Yu Shicun, a Beijing-based essayist and literary critic, said Mo Yan was a puzzling choice for the prize.

"I don't think this makes sense," said Yu in a telephone interview. "His works are from the 1980s, when he was influenced by Latin American literature. I don't think he's created his own things. We don't see him as an innovator in Chinese literature."

The literature prize is the fourth of this year's crop of prizes, which were established in the will of Swedish dynamite inventor Alfred Nobel and awarded for the first time in 1901.

The writer, who was in the People's Liberation Army before progressing to academia, was one of the favourites to win the award this year, according to British bookmaker Ladbrokes, along with Japanese author Haruki Murakami.

The Academy has been charged in the past with being too Euro-centric, although the United States once again misses out with its last literature prize winner, Toni Morrison, recognised back in 1993.