China's Consumer Is In A Town You've Never Heard Of 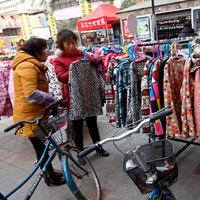 08 November, 2014
Print this article Font size -16+
Wearing a floral brocade cardigan and toting a Huawei smartphone, Guo Qian, 22, gushes over her latest purchases on Taobao, China's largest e-commerce platform. As an administrative worker, Guo makes only 3,000 yuan a month and spends most of it.

Not only does she spend nearly all of her own money, Guo also fritters away most of her father's 1,000 yuan monthly pension on trinkets and clothes on Taobao. "Sometimes I feel guilty using his money, so I buy him some clothes."

Guo, a Zhengzhou native, already owns an apartment - her parents helped finance the purchase last year - and is on the upward climb to join China's burgeoning middle class.

As Beijing tries to engineer a crucial macroeconomic shift -- toward more consumption and less investment, the crucial "rebalancing" China's new leadership is committed to, and the rest of the world is counting on -- it is young consumers like Guo Qian who may hold the key to the transition.

Raised in an era of unprecedented prosperity, Guo, like many other members of what is known as the 'post-80s' generation (anyone born after 1980) has a very different answer than her parents when it comes to a central economic question: whether to spend the money she has, or save it?

Her "spend it if you've got it" attitude, some economists argue, may help unlock the surge in consumption that China urgently needs to rebalance its economy over the next decade, ending an era of lopsided, investment driven growth.

"This 18-35 group, for a variety of reasons, are much more optimistic and more open to risk, because they haven't yet experienced bad times at all," says Benjamin Cavender associate principal analyst with China Market Research. "They tend to have high disposable income relative to their earning power, and they tend not to be saving heavily."

This generational change in mindset, harnessed to the sheer number of people growing more prosperous in once poor provinces throughout the country - such as Guo's native Henan - is recasting China's economic landscape: both the composition of growth, and its geography, are about to change significantly.

Go West Young People
Today, cities along China's eastern seaboard account for about 35 per cent of China's annual 18 trillion yuan retail spending. This reflects the extent to which cities such as Shanghai and Guangdong have prospered compared to the rest of the country since China's economic opening 30 years ago.

Surging income growth in China's interior - as companies shift manufacturing capacity away from the east, in search of less expensive labor and new markets - is shifting the economic balance of power in China.

"(There) will still be growth along the (east) coast. But it's in the first band of inland provinces - Jiangxi, Henan, Anhui-- where you will see more significant growth in the consuming class," said Jeff Walters, Beijing-based managing director at the Boston Consulting Group.

"If you look at the coming years, you have a lot of consumers whose incomes are rising, and they are just about to cross the threshold into those levels of income where households are going to become more comfortable spending more."

The emerging comfort zone has important macroeconomic implications. Today, China's household savings rate is around 28 per cent, among the highest in the world. Most economists blame a patchy, still-under-construction social safety net for keeping savings rates high and consumption low.

But continued strong wage growth is prompting Chinese households to loosen the reins on spending. In urban areas, average total income per capita has grown nearly 30 per cent since the end of 2010 while disposable income per capita has also risen about 30 per cent. Helen Mees, an economics professor at New York University, forecasts the household savings rate will fall from to 24 per cent by 2020.

Where The Growth Is
The newly emerging economic landscape is most visible in Henan, the country's third-most populous province, where bucolic pastures have long since given way to crowded cities and construction cranes.

The province grew by 11.6 per cent in 2011, in part due to a huge inflow of foreign direct investment. According to a report by the Economist Intelligence Unit, the province is now home to three of the fastest growing cities in China - Zhengzhou, Jiaozuo and Xinxiang.

Across China, the labor market has been steadily tightening, in part because China's aging population is reducing the number of working age employees. In 2012, the number actually fell for the first time since China opened its economy more than 30 years ago.

In response, companies, both foreign and domestic, have been moving a massive amount of manufacturing capacity from the east to western and interior cities like Zhengzhou, taking advantage of lower labor costs and government tax incentives.

In Zhengzhou, the resulting jobs boom has lured nearly three million new residents to the city over the last decade - the overall population is now nine million - the vast majority coming from the countryside for the first time.

Partly as a result, by 2020 there will be nearly twice as many urban middle class and affluent households - defined as those making 75,000 yuan or more annually - in Henan than there are today in Shanghai, according to a Reuters calculation based on figures provided by the Boston Consulting Group (BCG).

"Provinces like Henan have a big population base, and on top of that, the people are becoming richer and richer at a faster pace," said Louise Liu, deputy director of EIU's Access China and co-author of a 2010 report on China's fastest-growing cities.

Chongqing, Hunan, Hebei, Anhui will also experience a boom in urban middle class and affluent households, with their numbers growing to about the size of Shanghai's currently, according to a recent study by Boston Consulting Group.

Not only are those regions now growing more briskly than cities in the east, the behavior of consumers, market researchers say, is changing across provinces in China's heartland for concrete economic reasons.

Disposable incomes tend to be higher in places such as Zhengzhou and Chongqing, even if wages are slightly lower than they are in Beijing and Shanghai. A big part of the reason: for all the talk about a real estate bubble in China, apartments are much more affordable in smaller cities throughout China's interior.

Guo already has her apartment, and she plans to buy another one with her boyfriend in two years.

"Lower housing and other costs in smaller cities mean households have more left over after basic living expenses to spend on discretionary items," said BCG's Walters. "This is a key reason why the lower-tier consumer who just crossed the middle class threshold tends to be more secure and willing to spend than their higher tier city counterparts."

No Longer A Savings Mindset
Economists who believe China's rebalancing is underway say population trends and income growth are only part of what will trigger a sustained increase in consumption's share of the overall economy. Rising disposable incomes coincide with a change in psychology among younger consumers - a shift that means when it comes to money and spending they are decidedly not their parents.

"We don't have that mindset to save all our money and worry about what will happen in the future," said Han Lingxiao, a law student in Jiaozuo city, 90 kms (54 miles) from Zhengzhou. "We are more focused on how to improve our lives now."

Han moved from a poor farming county near Jiaozuo to study law at a city university. She says her younger brother who is only 12 will also follow in her footsteps and move to the city.

For younger consumers like Han, three decades of steady economic growth means that "perpetual optimism is the driver," said Ling Hai, China general manager for Mastercard <MA.N>. "They will not save as their parents have, and they will start to use tomorrow's money."

To be sure, a major economic shock of the sort that derailed the U.S. consumer in 2008-2009, could similarly undercut China's. But absent that, many economists and market researchers now believe the shift in attitudes toward consumption will prove to be durable, even if the economy slows.

"China is fueled by a belief that tomorrow is going to be better than today," said Tom Doctoroff, Asia Pacific head of advertising firm JWT and author of "Billions: Selling to the New Chinese Consumer."

That psychology is evident in the evolving tastes of consumers. Like so many of their counterparts in the developed world, young Chinese, whether in Shanghai or Zhengzhou, now regard brands as investments reflecting their status in society, Doctoroff said.

Brands Betting On Middle Class
Not surprisingly, with so many of those younger consumers located in smaller, more far flung cities, domestic and foreign consumer goods companies are making substantial bets on the anticipated surge in consumption.

"Tier three cities are really important for us. They're growing really fast and are a way for us to reach this soaring middle class," said Stephane Rinderknech, Vice President of L'Oreal's luxury division in China at a press conference recently.

Sportswear maker Adidas <ADSGn.DE> has already doubled its lower-tier city presence over the past two years as part of a plan to expand into 1,400 cities by 2015. And Starbucks <SBUX.O> will increase the number of its stores outside wealthy cities like Beijing and Shanghai by 20 to 30 per cent over the next few years.

Ou Ye, 23, is precisely the type of consumer all three of those companies want to attract. The former model turned schoolteacher lives in Chongqing, a massive city in southwestern China and one of the places where the emerging consumer class is expanding most rapidly.

Wearing a fuchsia coat and black suede boots, Ou says she spends upwards of 70 per cent of her 4,000 yuan per month teacher's salary on clothes. Her favorite brands, she says, are Hennes & Mauritz  and Shanghai-based Lulualways. She picks up new fashion trends off the Internet.

"I used to make my decisions purely based on designs, now I think about quality. If something is more expensive but has better quality, I will buy it," Ou said.

Back in Jiaozou city, Jiang Xiao, a fellow law student and friend of Han Lingxiao's, expresses another sentiment that consumer goods makers - not to mention economists worried about China's rebalancing - love to hear. "My parents and grandparents," she said, "believe whatever you earned is whatever you saved. But not our generation. We are more Western in our consumption style." (Reporting by Melanie Lee; Editing by Bill Powell and Bill Tarrant)