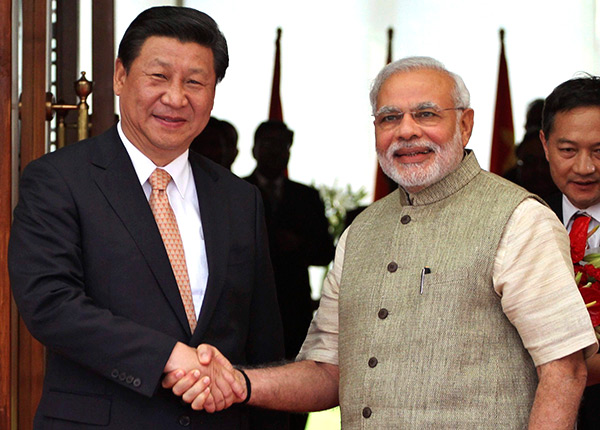 08 November, 2014
Print this article Font size -16+
Giant billboards in Mandarin, Gujarati and English at various places In Ahmedabad, the traditional Garba dance at the airport were all part of the red carpet welcome that the Gujarat government rolled out for Chinese President Xi Jinping on Wednesday (17 September).

Xi, the first top Chinese leader to visit Gujarat, landed in an Air China special aircraft with his wife and an official entourage. The choice of Gujarat as Xi's first stop in India marks a departure from protocol and many see it as a sign of warm relations between the two leaders.  The leaders also meant business.

Within hours of Xi's arrival, India and China inked three pacts in Ahmedabad on a day which also happened to be Modi's birthday. President Xi Jinping is  on a three-day visit to India during which the two countries will focus on ramping up trade and investments, besides discussing substantive issues including the contentious border dispute.

Modi and Xi, who met for a while, will hold extensive talks in Delhi on Thursday (18 September).

A $6.8 billion deal to set up two industrial parks for Chinese investment in India was on the cards, a senior Chinese official said in New Delhi, at a separate event where another $3.4 billion worth of agreements was signed between Chinese and Indian firms.

Indian airline IndiGo, the country's largest by market share, said it had sealed a $2.6 billion agreement on the sidelines of the summit with Industrial and Commercial Bank of China (ICBC) to finance more than 30 new aircraft.

Further deals worth tens of billions of dollars were expected to be announced on the three-day visit, dwarfing the $400 million invested by China in India over the past 14 years.

Xi, accompanied by his wife Peng Liyuan and a delegation of senior party and government officials, was received by Gujarat Governor O P Kohli and Chief Minister Anandiben Patel and other senior state Cabinet ministers and accorded a grand welcome with various folk artists performing at the airport.

Prime Minister Narendra Modi welcomed the visiting dignitary and his wife at the entrance of the Hyatt Hotel after which the Prime Minister showed them an exhibition of various Buddhist artifacts and slides.  Thereafter, the two leaders had a brief meeting before heading for the signing-in ceremony of the pacts which are aimed at giving boost to Chinese investments here.
Modi is keen on Chinese investment to help balance $65 billion in annual trade that is heavily tilted in China's favour. He is also seeking more access for India's IT services and pharmaceuticals to China.

The visit coincides with a slowdown in China's economy, which has prompted Chinese companies to look abroad for growth opportunities.

Three Pacts
The agreements include sister city pact between Guangzhou in China and Ahmedabad and setting up of an industrial park in the state.

Keen to boost its trade ties with India, the Chinese side has already indicated that it will pledge to invest billions of dollars in India's railway, manufacturing and infrastructure projects during the Xi's visit, the third by any Chinese President to India.

Ahead of a rare visit to India on Wednesday, Chinese President Xi Jinping said a combination of the "world's factory" and the "world's back office" will drive global economic growth, playing down mistrust that has kept the Asian giants apart.

"As the two engines of the Asian economy, we need to become cooperation partners spearheading growth," Xi wrote in a column in The Hindu newspaper.

He said China's strong manufacturing base and India's software and scientific skills had massive potential both as a production base and for creating a consumer market.

Dragon & Elephant
Modi hopes the leaders of the world's two most populous nations will establish a personal rapport to match the warmth he shares with Japanese Prime Minister Shinzo Abe, who wished him happy returns in a phone call on Wednesday morning.

But beyond the smiles and the commercial embrace, ties between nuclear-armed India and China are marked by competition for energy and regional clout as well as a festering border dispute that led to a brief war 52 years ago.

Days before the two leaders shook hands and smiled in Ahmedabad, friction emerged over an alleged Himalayan border incursion by China and over a pact between India and Vietnam to explore for oil and gas in parts of the South China Sea claimed by Beijing.

In his column, Xi said the "Chinese Dragon" and the "Indian Elephant" both cherished peace and shared one of the most dynamic and promising bilateral relations of the 21st century.

In one sign that India wanted the Xi visit to be a success, New Delhi asked the exiled Tibetan spiritual leader, the Dalai Lama, to reschedule an event in the capital so that it would not clash with the Chinese president's trip there on Friday.

The Dalai Lama, whom Beijing labels a separatist seeking an independent Tibet, has lived in India since fleeing across the Himalayas after a failed uprising against Chinese rule of his homeland in 1959.

Police detained a small group of Tibetan protesters from outside China's embassy in Delhi on Wednesday. Other Tibetans were held in Gujarat.

"Given Modi's focus on boosting flagging infrastructure and manufacturing investment, India will increasingly focus its economic diplomacy eastward," said Sasha Riser-Kositsky of the Eurasia group in a research note on Wednesday.

"Yet despite these enormous investment pledges, Modi's pronounced nationalism and continued wariness about China will limit India's warming with Beijing while driving deeper strategic cooperation with Japan."

Modi is not the only regional leader seeking strategic influence, defence partners and economic opportunities.
Japan's Abe and China's Xi have also been making rounds seeking spheres of influence.
IndiGo Inks $2.6 Bn Aircraft Finance Deal With China's ICBC
Budget airline IndiGo has signed a $2.6-billion deal with Industrial and Commercial Bank of China Ltd (ICBC) for the lender to finance more than 30 new aircraft, the carrier said in a statement on Wednesday (17 September).

The announcement comes on the day Chinese President Xi Jinping arrived in India, where the two countries are expected to sign trade and investment deals worth billions of dollars.

Under the memorandum of understanding, ICBC will provide IndiGo, India's largest airline by market share, with financing for the planes through either a sale and leaseback, financial lease or commercial lending deal, IndiGo President Aditya Ghosh said in the statement.

Privately owned IndiGo said it will use the deal to add Airbus A320 planes to its fleet.

The majority of IndiGo's fleet is financed through sale and leaseback agreements - under which a third party owns the planes and then rents them to the airline - and is one factor analysts say has helped keep the airline profitable while India's other big carriers lose money in a highly competitive market.

IndiGo, owned by InterGlobe Enterprises, is planning on listing on the Mumbai stock exchange next year, people involved in the deal previously told Reuters.

Sino-Indian Relationship Can't Be Duplicated
The Sino-Indian cooperation is of enormous strategic value for New Delhi and such a relationship cannot be "duplicated" by its bilateral ties with any other country, an influential official Chinese daily said today, coinciding with the visit of President Xi Jinping to India.

State-run Global Times, part of the ruling Communist Party of China's People's Daily publication group, said in an editorial that the Sino-Indian cooperation is "invaluable".

"The geopolitical significance of the benign development of Beijing-New Delhi ties can't be duplicated," said the daily known for its nationalistic views.

"The better China-India relations develop, the more advantages and initiatives India can have when dealing with the US and Japan."

China has been regarded as their biggest rival by the US and Japan, who instinctively try to rope in China's neighbours to their cause, the editorial said.

"A positive New Delhi-Beijing engagement would force Washington and Tokyo to cosy up to India," it said.

On the global strategic chessboard, Japan and India wield nearly the same influence. In contrast to Japan's hostile policy towards China, India follows a cooperative principle.

"Therefore, Japan has to seek the favour of India, not the other way around," it said.

Xi is the first leader of a major power to visit India after the Narendra Modi-led government took charge, it said.

His first stop is in Prime Minister Modi's home state of Gujarat on Modi's 64th birthday.

"This is viewed as a starting point for the two leaders to develop a personal friendship," the editorial said.

Referring to Modi's recent visit to Japan, the daily said the "floods of rhetoric such as 'joining hands to counter China' emanated from Japanese public opinion to which Modi gave a rational response at the time."

"Now it seems that this mentality from many Japanese is very wide of the mark."

China has a long-term strategy for a friendly cooperation with India, rather than seeking short-term gains, it said adding that "for us, the Sino-Indian relationship, with its own strategic merits, doesn't have to be associated with ties with other major powers."

"Both China and India are continent-sized countries but have embarked on different paths and developed different advantages.