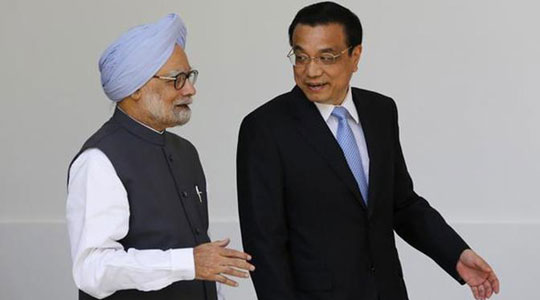 08 November, 2014
Print this article Font size -16+
China and India have agreed on a roadmap to reach a "dynamic balance" in bilateral trade between the two nations, China's Premier Li Keqiang said on Monday, 20 May 2013, following Indian complaints about the size of the trade deficit with its neighbour. The number two in the Chinese leadership offered New Delhi a "handshake across the Himalayas" and said the world's most populous nations could become a new engine for the global economy if they could avoid friction on the militarised border.

Weeks after the flare-up on the border issue, India and China sought to further improve their bilateral relations and firmed up eight agreements to enhance cooperation in a range of areas including trade, culture and water resources.

The agreements were signed after delegation-level talks between Prime Minister Manmohan Singh and his Chinese counterpart Li Keqiang.

The pact for setting up of the working groups was signed by Commerce Minister Anand Sharma and his Chinese counterpart Gao Hucheng.

Indian Prime Minister Manmohan Singh told Li it was important to balance out trade as the two countries aim for $100 billion in bilateral trade by 2015.

"While we are committed to the $100 billion by 2015 we will have to have a more balanced rate," said the senior government official, who was briefed about the restricted meeting.

India has been pressing for greater access for its pharmaceuticals and IT services.

Up from next to nothing in the 1990s, trade has been heavily skewed in favour of China. It exports power and telecoms equipment to its neighbour, which as one of the world's fastest growing major economies could offer brighter opportunities for business than the stagnant West.

Li said trade, an economic corridor and industrial loans would feature in the talks being held on Monday. A joint statement is due to be signed later in the day.

Handshake Across Himalayas
Chinese Premier Li Keqiang is seeking to build trust with India on his first foreign trip since taking office, which comes just a few weeks after a military standoff between the Asian giants on their ill-defined border in the Himalayan mountains.

The number two in the Chinese leadership offered India a "handshake across the Himalayas" in an editorial published on Monday in The Hindu newspaper and said that together the emerging economic giants could become a new engine of the world economy.

China and India disagree about large areas on their 4,000 km long border and fought a brief but bloody war 50 years ago. There has not been a shooting incident in decades, but the long-running dispute gets in the way of improving economic relations between the world's two most populous nations.

The editorial was part of a media campaign apparently aimed at cooling Indian public anger against China following the three-week standoff on a freezing Himalayan plateau that ended on May 3.

In an impromptu speech after an official welcome ceremony at India's colonial-era presidential palace on Monday, a relaxed-looking Li stood with Prime Minister Manmohan Singh and said he wanted to build trust and cooperation on his trip.

The two leaders held closed-door talks on Sunday, shortly after Li arrived in the Indian capital.

Singh told Li that friction on the border could affect relations. He pressed his counterpart to do more to redress a trade imbalance that has left a $29 billion deficit with China at a time India is struggling with a record current account gap that has emerged as its main economic weak point.

The latest incident distracted diplomats' attention from negotiations on investment and trade ahead of Li's trip and soured Indian public opinion toward China.

Also raised in the meeting was the issue of the Dalai Lama, who China considers a separatist and who lives in exile in India.

India repeated its position that the Dalai Lama is a spiritual and religious leader, a senior Indian government official said. On Monday, a protester dodged tight security to unfurl a banner saying "Tibet will be free" in front of the hotel where Li is staying in Delhi.

India As First Destination On Li's 4-nation Tour
Prior to the visit, Li said he chose his first destination on the four-nation tour to show how important India is for China and also because he had fond memories of visiting as a Communist youth leader 27 years ago.

India's Essar Group conglomerate is set to sign a $1 billion loan deal with China's China Development Bank and China's largest oil and gas producer PetroChina during the trip, sources said. They said the loan would be backed by the supply of refined products to PetroChina.

After India, Li is due to visit Pakistan, Switzerland and Germany and is likely to carry a message that China wants more open foreign relations and should not be seen as a threat.

"We stand ready to embrace the world with a more open mind and hope that the world will view China with a calm frame of mind," he wrote in the editorial.