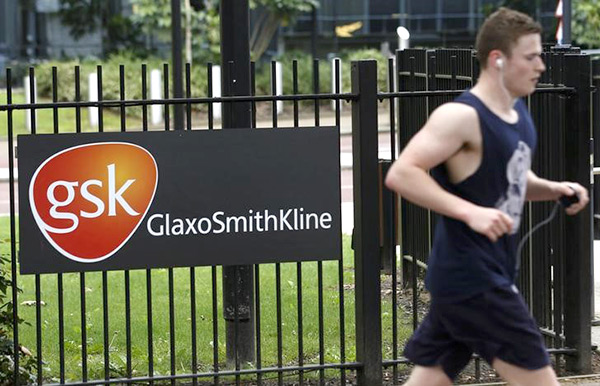 08 November, 2014
Print this article Font size -16+
China fined GlaxoSmithKline Plc a record 3 billion yuan ($490 million) on Friday for paying bribes to doctors to use its drugs, underlining the risks of doing business there while also ending a damaging chapter for the British drugmaker.

A court in the southern city of Changsha also sentenced Mark Reilly, the former head of GSK in China, and other GSK executives to between two and four years in jail, according to state news agency Xinhua.

However, Briton Reilly, shown on state television wearing a suit and looking tired during the trial, will be deported and will not face jail time in China, a source with direct knowledge of the case said.

"Reilly will be deported so he won't be in detention in China," said the source, who declined to be named because of the sensitivity of the case.

The verdict, handed out behind closed doors in a single-day trial according to Xinhua, highlights how Chinese regulators are increasingly cracking down on bad behaviour.

However, it also offers GSK a potential way forward in the fast-growing Chinese pharmaceutical market, a magnet for foreign firms who are attracted by a healthcare bill that McKinsey & Co estimates will hit $1 trillion by 2020.

"If GSK China can learn a profound lesson and carry out its business according to the rule of law, then it can once again win the trust of China's government and people," Xinhua said in a commentary.

Committed To China
GSK said it remained committed to China and promised to become a "model for reform in China's healthcare industry".

"GSK Plc has reflected deeply and learned from its mistakes, has taken steps to comprehensively rectify the issues identified at the operations of GSKCI, and must work hard to regain the trust of the Chinese people," GSK said in a written apology.

Future commitments include investment in Chinese science and improved access to medicines across the country through greater expansion of production and flexible pricing, it said.

Roche Chief Executive Severin Schwan told Reuters in an interview this week: "I remain very bullish about China, even though currently the market has slowed down and pricing pressure has increased."

GSK also faces investigations into its overseas practices by U.S. and British authorities. Those investigations continue and could result in further penalties for the group.

"The SFO criminal investigation into the commercial practices of GlaxoSmithKline plc and its subsidiaries continues," a spokeswoman at Britain's Serious Fraud Office (SFO) said in an email.

In addition to the high-profile Chinese case, GSK has been accused of corrupt practices, on a smaller scale, in Poland, Syria, Iraq, Jordan and Lebanon.

GSK said the activities by the firm's China unit were a "clear breach" of GSK's governance and compliance procedures.

Chinese police first accused GSK of bribery in July last year when it said that the firm had funnelled up to 3 billion yuan, exactly the same amount as the fine, to travel agencies to facilitate bribes to doctors and officials.

"Reaching a conclusion in the investigation of our Chinese business is important, but this has been a deeply disappointing matter for GSK. We have and will continue to learn from this," GSK CEO, Andrew Witty, said in the statement.

Surprise Announcement
The case is the biggest corruption scandal to hit a foreign company in China since the Rio Tinto affair in 2009, which resulted in four executives, including an Australian, being jailed for between seven and 14 years.

The judgment on Friday took many people by surprise, partly because Chinese authorities did not make the date of the trial public in advance.

The ruling from the Changsha Intermediate People's Court means China has charged GSK's China unit with bribery as well as the individual executives.

Under Chinese criminal law, bribery by a corporate unit can lead to a large fine and jail sentence for the unit's head.

A spokesman for the British Consulate General in Shanghai said that Britain had "continually called for a just conclusion to this case", but declined to comment further while the case was open for appeal.

Shares in the company were slightly higher on Friday, despite the Chinese news, as the market took the penalty in its stride. A fine had been widely expected and the $489 million hit will be relatively manageable for a company with a market value of $113 billion.

"GlaxoSmithKline will hope that this will draw a line under events in China, but it will take time for its Chinese commercial operations to recover," said Mick Cooper, analyst at Edison Investment Research in London.