“For any developmental work to take place at any level, you need leaders. Unless we have leaders with a clear vision, the results will not be forthcoming," said Virender Sharma, Joint Secretary- Department of Urban Development, Government of Himachal Pradesh 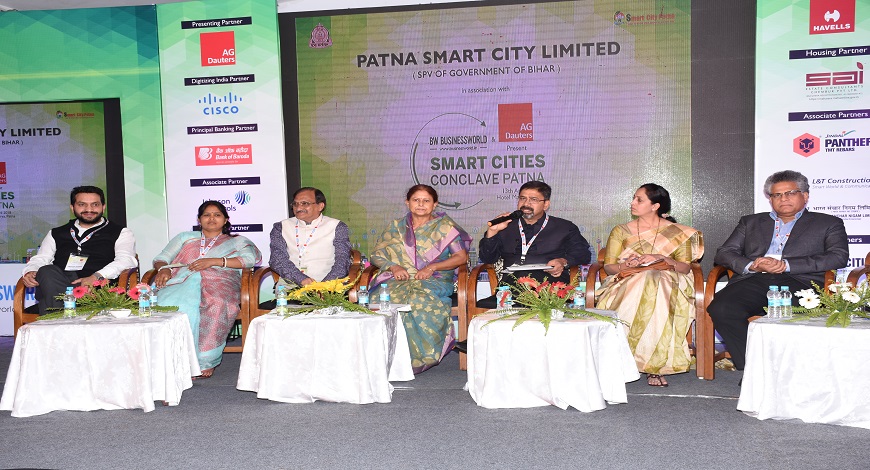 The realm of smart cities has widened since the mission’s inception in the year 2015 with Prime Minister Narendra Modi calling it a people’s movement recently, a lot is riding on this mission given the massive funding promised by the Government in recreating India’s urban infrastructure.

Taking a look at the challenges, possibilities and building blocks needed to be addressed to make the smart city vision a reality, a panel of experts came together at BW Businessworld Smart Cities Conclave, Patna.

Anjum Parwez, Secretary, Department of Urban Development, Government of Karnataka said, “We have not been able to keep the required pace of our smart cities mission since last 3 years, thus, it is important to bring people on board through these kind of panel discussions to understand the issues and possibilities together. It is a crucial point to try to take a stock of what has been done on the ground in these 3 years since the announcement of our smart cities mission.”

Talking about the right support for SPVs from Urban Local Bodies (ULBs), Vinod Aggarwal, Mayor, Moradabad Municipal Corporation, “Our SPV has been formed just now, but, execution power rests in the hands of mayors, and they should tell this to their counsellors, I don’t think there is anything wrong in this.”

Highlighting the expectation from smart cities mission as a Mayor, Sima Saha, mayor, Bhagalpur Municipal Corporation stated, “No work has been done under this mission yet, we want that the work is done under it, but, honestly, the pace of project completion has to speed up. We want to take up the responsibility for completing the projects at hand on time.”

Emphasizing on the need of public consultation, Shobha Srishail Banshetti, Mayor, Solapur Municipal Corporation avowed, “There has only been talks about smart cities, but no work has been seen on ground when I joined the corporation after one year of this mission’s implementation. I only used to see the designs on paper, nothing concrete on ground. But, things have been pacing now, and consultation with people has been happening in our city. Retaining young talent is also an issue in Solapur, but, we are at it, Solapur will be smarter than before within one year.”

About the lack of coordination between various departments of concerned ministries which is a core issue, Virender Sharma, Joint Secretary- Department of Urban Development, Government of Himachal Pradesh asserted, “For any developmental work to take place at any level, you need leaders. Unless we have leaders with a clear vision, the results will not be forthcoming. How we are trying to deal with it is, immediately after the mission was announced, the concept notes were asked to be filed by various departments concerned, once they filed the notes, they thought it is their note and they have the ownership of that particular project in terms of strategy planning and project implementation, and this is how the projects should look like, hence, the department preparing the note has been made responsible for getting the job done, this system has worked for Shimla so far.”

Talking about basic services to citizens regarding their day to day problems, Sita Sahu, Mayor, Patna said, “We believe in making it easy for our people to access basic facilities like securing the birth and death certificates and other basic facilities all from one place without having to go to multiple agencies. Thus, we will make a Jan Suvidha Kendra in each ward to bring it near to the citizens without any hassle. Our work will be launched on the ground within 6 months.”

Giving his view on the private sector investment, the role of private sector and adopting the PPP model, Ashish Mathur, Managing Director, JUSCO said, “The solutions in Jamshedpur are replicable anywhere in India. Creating the credibility of a municipal corporation can be done by ensuring private investment. Jamshedpur is a live example of PPP model today.”