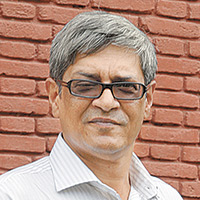 08 November, 2014
Print this article Font size -16+
Is the government in Delhi irrelevant? Does India’s growth chug along because of what’s happening in states (and state-level policies) alone? Growth in 2013-14 will probably be a shade below 5 per cent. Is there sufficient evidence of the so-called green shoots sprouting to suggest that the worst is over and that growth will inch up to around 5.5 per cent in 2014-15, regardless of electoral outcomes in 2014?

On the purely external sector, we can’t expect growth rates in excess of 9 per cent until the global economy recovers completely. That won’t happen in 2014. But 2014 looks better than 2013. Much is made of a possible US tapering. Yes, that has volatility implications. But US tapering may also be countered by greater liquidity infusion in Europe or Japan.

If one adds up GSDPs (gross state domestic product) and expresses that as a share of India’s GDP, the percentage has increased over time, primarily because defence and railways have stagnated. But that doesn’t mean the government in Delhi is irrelevant. If nothing else, it exercises a malign influence. And UPA, particularly, UPA-II, will leave a legacy of messing up land markets (land legislation), labour markets (MGNREGA), capital markets (high fiscal deficits, a possible National Urban Health Mission) to add to National Rural Health Mission, Pay Commission, food security legislation and deterring entrepreneurship.

Growth in 2014-15 can’t be spectacular. Despite 9 per cent-plus being conditional on a complete global recovery, there is plenty of slack and scope for reforms for there to be endogenous growth to take India to an 8 per cent trajectory. Growth isn’t a mere number. It translates into employment generation, which has also stagnated. However, one can’t get to 8 per cent overnight. If the base is 5.5 per cent in 2014-15, it can inch up to 6.5 per cent in 2015-16 and 7 per cent in 2016-17 and so on. The excess over 5.5 per cent is certainly conditional on the new government and on what it does, especially in the first few months.

There is a long list of pending reforms — agriculture (linked to food inflation), infrastructure (especially power), taxation (both direct and indirect), judiciary and police, pensions, insurance and labour market. Many of these require legislation. Not only does legislation have to wind its way through Parliament, it is also a function of the ‘coalition problem’. In the foreseeable future, there will be coalition governments. While the coalition part is important, I think too much is made of it. The collapse under UPA has been more executive.

When I say the collapse has been executive, I mean more than the dual power structure under UPA and the role of the National Advisory Council. I also mean the complete collapse of collective decision-making on the part of Cabinet, with GoMs and EGoMs taking over that role. I mean the refusal of bureaucracy to take decisions, compounded by the Right to Information, taints of scams, possible vigilance enquiries and some offensive sections in the Prevention of Corruption Act. There are at least two reports by the second Administrative Reforms Commission on how to ensure that honest bureaucrats are protected, while the guilty are punished. The new Pay Commission, a fait accompli, will devastate state finances, but can be used as a trigger to implement these. I also mean a steady undermining of the Prime Minister and PMO, reflected in the abysmal failure in handling foreign policy.

While increasing the investment/GDP share is an issue, the incremental capital/output ratio has crossed 6.5, again highlighting inefficiency in capital usage and the fact that the problem is not just with fresh projects, but stalled projects.

What to expect in 2014 is not so much a function of which political configuration forms the government. It is more a function of whether PM/PMO are rehabilitated and whether Cabinet begins to function collectively. There is a related matter too. Under UPA, there has been greater centralisation, with legislation and policies framed in Delhi for state subjects. There has also been an inability to talk to the states, not just on matters like the National Counter Terrorism Centre, but also GST and even foreign policy (where an agreement with Bangladesh has been held up).

To ensure perhaps 6 per cent in 2014-15 (and not 5.5 per cent) and set the stage for the subsequent stepping up beyond 2014-15, a stronger PM/PMO is critical. It is desirable. Is it probable? Can we expect it in 2014? Regardless of the outcome of the general elections, I think the answer is yes. Not only is the present model unworkable, there is increasing recognition that it is unworkable. That’s the real silver lining.