Caution Is The Watchword 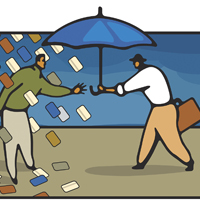 Adds Rajesh Saluja, MD and CEO at ASK Wealth Advisors, which manages nearly Rs 5,000 crore in assets, "Broking and investment banking have died and no new money has got created since 2008, while competition has tightened with the emergence of new players. In the last 4 years, some 24 new institutions havecome into effect. The only way out was real estate and the alternate asset class which have helped in improving margins." For ASK, in the last 2 years, monies were made from discretionary portfolio management, real estate and alternatives such as private equity and structured products, which gave them an upfront commission in the range of 1.5-2.5 per cent. "We have beaten the industry as our focus on alternatives has helped us make 100-120 basis points (bps) in a business which has been delivering 60-80 bps," says Saluja, who feels that apart from high returns, the perceived risk in structured products and alternatives was considered lower than equities and that has helped in selling these products.

Meanwhile, exotic products such as art, where margins were attractive, have been a complete no-no among his clients.

The Big Shift
The downturn, in fact, has brought about a big shift in the minds of UHNIs/UHNHs, with the concept of ‘long' disappearing. "India was considered to be a growth-oriented market, that has now been questioned by UHNIs. The reason: in the last five years, the best mutual fund manager has delivered 7-8 per cent compared to a 4 per cent gain by the Nifty," says Kapoor and adds, "Today, long is not the only option; besides, there is interest in commodities and a lot of investment has gone into commercial real estate where the yields are around 8-10 per cent."

Overseas investment, especially in realty is also catching on. UHNIs are buying properties in places such as London and Singapore. This is because earnings from overseas markets have helped increase their overall revenues and they want to have a foreign base. "Even when returns from equities were good, wealthy Indians have had wealth preservation as their priority," says Ramachandran. He adds, "The idea is not to generate returns greater than their business income, but to grow their wealth without risks."

Says Atul Singh, MD and head of global wealth and investment management, DSP Merrill Lynch, "Over a long term, asset allocation creates value and we maintain the same with our clients. However, clients generally follow what has given returns, and today, it is debt."

Risk aversion has hit a new high, indicated by the willingness of big-ticket investors to pay money just to safeguard their capital. What are wealth managers doing? "This year, it is the survival of the fittest; focus will continue to be on the bottom line," says Bagga of Deutsche Bank.

Players such as Edelweiss have already started hiring non-finance sales professionals. A year ago, on a pilot basis, six non-finance sales professionals were hired and trained to become wealth managers. "Their performance has been better than expected and we got them at one-third to half the cost of any finance wealth manager with 4-5 years of experience," says Kapoor. Though managing costs will be critical, with foreign and Indian players sitting on losses, a near-term shakeout looks inevitable.