Cashing In On Misfortune 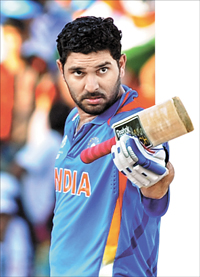 Also, there are cases when sports celebrities have inspired millions after conquering disease. The most famous case in the sporting world is that of Lance Armstrong, the cycling champ who won a battle against cancer. Apart from establishing Livestrong, a foundation to support cancer patients, the Tour de France legend reportedly once mentioned that he had stopped doing endorsements that were not meant to help society or to help fight cancer.

While it would be premature to comment on the direction that Yuvraj's publicity managers might advise him to take, at this point of time the star cricketer has been using Twitter to stay in touch with his fans. One of his Twitter feeds is about taking inspiration from Armstrong. Another one, put up a day after the Birla Sun Life campaign broke, gently pushes the brand he endorses. "My new TV ad for Birla Sun Life Insurance. Jab tak balla chalta hai, thaat hai. Eager to hold my #balla again!," said the tweet.

While the results of the campaign are still a few weeks away, one cannot deny the fact that this ad has got people, at least the intelligentsia, talking about insurance advertising.

In terms of category penetration, insurance still has a long way to go. As Aditya Birla Group's Kakar says, "The industry has not even managed to scratch the surface of the opportunity that awaits us. Today, life insurance only enjoys a penetration of approximately 15 per cent of retail household savings." According to an insurance industry newsletter, the industry has been witnessing a fall in premium collections from individual policy holders for a better part of 2011. Possibly one of Yuvraj's latest tweets unintentionally sums up the industry situation. It says, "Life is unpredictable. Highs and lows are part of it, and one needs to deal with them. That is why the Birla ad is close to my heart."