Cashing In On Goodwill 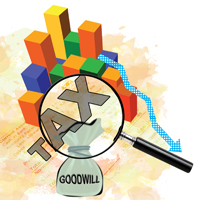 08 November, 2014
Print this article Font size -16+
Back in 2004, when Alstom T&D’s Indian business was purchased by Areva, less than two-thirds of the price paid for the company was traceable to value of assets purchased. The excess amount — goodwill, according to accountants — was the price that was purportedly paid for unquantifiable assets such as the value of the contracts in hand, the skills that came along with the workforce being bought, and know-how (which could even be a list of preferred vendors that gives the purchaser some new advantage).

The only problem was that the Income Tax Act did not recognise goodwill as an asset eligible for depreciation. Depreciation benefit would have helped them lower their tax outgo as it could be deducted as business expenditure from income. Areva had to spend seven years fighting the tax department to claim their right to the benefit of depreciation before winning the case in the Delhi High Court earlier this year.

The Supreme Court has now clarified, in the case of Smifs Securities, a Kolkata-based brokerage, that goodwill also forms an intangible asset and is eligible for depreciation. What was so far a sunk cost (the amount paid for a purchase in excess of the net value of assets held did not give the company any cash-flow benefit whatsoever) would now allow the company to take a 25 per cent depreciation benefit on the value of goodwill annually.

Tax experts are ecstatic: this is the first judgement by the apex court that gives such a benefit to purchasers of assets. Sunil Jain, who heads the direct tax practice at law firm J. Sagar & Associates says, “This is a very useful judgement in as much as when a purchaser pays a higher price than the market value of assets purchased, he gets some kind of tax benefit on the excess.”

How big could this excess go? A 2007 report by Brand Finance’s Global Intangible Tracker estimated that intangibles could account for up to 90 per cent of the asset values in sectors like media and healthcare.

Some of these like IPs, patents and know-how are already eligible for depreciation. But how do you account for items like value of contracts in hand, brand recognition or the benefit of lower lease rentals payable due to unexpired contracts entered into several years ago. The value of items like these inevitably gets built into the purchase price of every contract. Analysts estimate that on average, up to 65 per cent of the purchase price in deals can be intangibles.

The question is: can this translate into higher deal values?  At least, theoretically the answer is yes, as purchasers may be willing to share at least some portion of this benefit with the sellers. But what is certain is that it is a sure push for corporate acquisitions.

Rajiv Chugh, tax partner at Ernst & Young explains: “The ruling effectively converts what was earlier a sunk cost into a deferred tax asset, which will result in positive cash flows for the company over a period of time. This will give more room for negotiations albeit in favour of purchaser.”

Another ramification could be for balance sheet analysts, who could get to see the presence of goodwill on company books more often. Currently, only about five companies out of the top 500 have goodwill in excess of Rs 50 crore on their balance sheets. Perhaps because it was frowned upon by potential lenders as something that did not give them any sort of protection.

With that changing, companies might now want to show goodwill as an asset.