Cash In, Cash Out 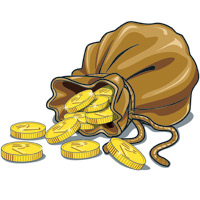 08 November, 2014
Print this article Font size -16+
For many, savings of Rs 2,000 a year, or Rs 167 a month, may not mean much. So when finance minister P. Chidambaram announced a tax credit of Rs 2,000 to individuals with a taxable annual income of Rs 2-5 lakh, they dismissed it. The more sensible, who still didn’t quite understand what Rs 167 a month could get them, called the move ‘inadequate’.
So, what can one do with the amount? With Rs 2,000 (or Rs 167 a month), 24-year-old Milind Pitale, who works with a Mumbai-based stock brokerage, can buy a second class railway monthly pass from Borivili to Andheri for Rs 115, and book a last-row ticket for a ‘no-star’ Marathi play with the remaining Rs 52.

Nirmal Menon, who started working for an insurance firm in Mumbai last year, would use the Rs 167 to buy a Rs 120-movie ticket and a glass of coke. Susan Davies, who works for a legal firm in Fort, Mumbai, would use the money to take a cab home instead of the local train.

So, the seemingly insignificant tax sop holds a lot of meaning for a lot of people — going by the FM’s account, 18 million tax-payers. “Any concession given to people in the low-income bracket benefits them immensely,” says Yash Arya, a partner at accounting firm Haribhakti & Co.

New budgetary norms stipulate that investors with a gross total income of up to Rs 12 lakh can invest in the Rajiv Gandhi Equity Savings Scheme (RGESS), up from the earlier prescribed limit of Rs 10 lakh. They can do so either by directly investing in the top-100 listed companies or through exchange traded funds (ETF). Investments in RGESS-compliant avenues will get investors 50 per cent deduction in the amount invested for three successive years. Maximum investment limit per year is Rs 50,000.
Another investment product to watch out for is inflation indexed bonds, which are meant to help investors get better inflation-adjusted returns.

An inflation bond, in normal course, is a sovereign bond with a competitive coupon rate (usually higher than inflation).

But will the bonds be pegged to the wholesale price index (WPI), or the relatively broad-based consumer price index (CPI), remains to be seen?

“The decision to increase the scope of RGESS to three years is a move in the right direction. It will give a good entry point for first-time investors. Inflation bonds, on the other hand, will help investors beat inflation and secure better returns. Both could be used for asset allocation,” says Sandeep Nanda, CIO of Bharti Axa Life Insurance.

The decision to reduce securities transaction tax (STT) from 0.017 per cent earlier to 0.01 per cent is another piece of good news for investors. It could even help to drive up trading volumes in the current scenario of stockmarket turbulence.
This means that a trader whose daily volume is Rs 1 crore in equity futures, will now pay only Rs 1,000 as STT, instead of Rs 1,700 paid earlier. “Traders who have been ignoring equities futures till now, will take a more neutral view of the segment,” says C.J. George, managing director of Geojit Paribas Financial Services.
The government, for the first time in many years, has imposed a tax-on-tax (or surcharge) on individuals whose yearly income exceeds Rs 1 crore.

So how much does 10 per cent surcharge mean in real terms? Say, the CEO of a company earns Rs 10 crore a year. Till now, the CEO was paying an income tax of 30 per cent, that is, Rs 3 crore. With the new surcharge of 10 per cent, he will now have to part with about 33 per cent of his income as tax, or Rs 3.3 crore.

“But that is fair… The country is passing through tough times. Such situations call for the super-rich to part with some of their income,” says Nirmal Jain, chairman of broking and financial services outfit, India Infoline (IIFL).
The government has increased excise duty on SUVs (with engine capacity greater than 1,500 CC) from 27 per cent to 30 per cent. So effective April, an SUV worth Rs 15 lakh will be costlier by Rs 36,000-38,000. Price of sedans may also shoot up as customs duty on certain passenger vehicles has gone up from 75 per cent to 100 per cent.
Luxury apartments with a carpet area of over 2,000 sq. ft, or of value more than Rs 1 crore, will attract higher service tax.

Also, buying immovable property (flat, shop, etc.) priced more than Rs 50 lakh will mean an additional 1 per cent tax deducted at source (TDS) on the cost price. So, buying a flat worth Rs 1 crore will mean TDS of Rs 1 lakh.

Investors in debt funds will get lower dividend income as the dividend distribution tax (DDT) has gone up from 12.5 per cent to 25 per cent. The purpose is to remove the undue tax advantage that debt funds had over bank fixed deposits (FD). Investors in the 20-per cent tax bracket will now be better off putting their money in bank FDs, which have  only 20 per cent (as per marginal tax slab) as DDT.

The finance minister may not have played ‘Santa’ to the common man, but considering the revailing tough times, his promise to bring down inflation could result in lower interest rates, triggering fresh capital investments, generating more jobs and lower EMIs.