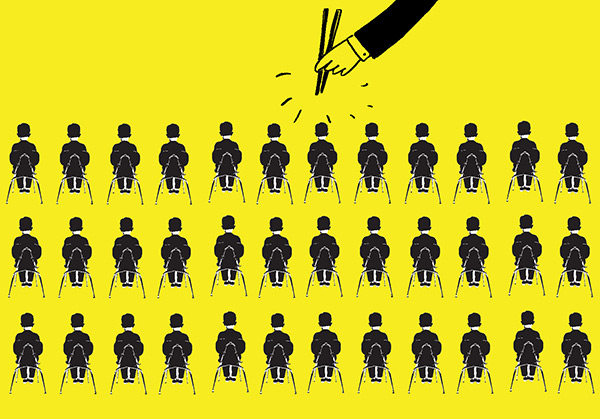 09 April, 2015
Print this article Font size -16+
Arpita Dandavate nibbled through her food in the cafeteria of Bright & Thakur (B&T). At her table were Madhav and Soham — they were consultants at B&T. All three had grown silent as the voices at the next table grew audible.
At the next table sat Vivek Sinha, Meghna Desai — both associate directors, along with two directors of the firm. Vivek and Meghna were agitatedly talking about their exchanges with the Principal of ABC school where their children studied. More than narrating, they were reiterating their arguments. Words flew around the trade off that schools did of quality over quantity, of how schools tried to create an aura of difficulty but, in fact, the learning that was happening was questionable, that the integration of knowledge between subjects was absent and the focus on fact-based evaluation at the exams did not aid strategic thinking and hence, Vivek was saying, “How do we even know what quality we are hiring? I might choose the student with 75-85 per cent marks over someone with a 98 per cent, for he may well have the strategic thinking we need, even if he does not know which joint secretary signed the Mandal Commission report!”
Some explanation followed, some laughter, some argument and Soham and Arpita rolled their eyes as if to say, now, what do we do?
As they picked up their trays and stood up to leave, Vivek caught the eye of Madhav and said, “Arre, get those executive trainees on board by end of November, the organisation structure study for the municipal corporation has come through, it is a mammoth task, so step on it!”
B&T was hiring six executive trainees for this huge assignment and Arpita and Soham were sifting through CVs from candidates who had just graduated. Some were applying to grad schools overseas and would bide time till next fall.
Vivek: We want candidates who will stay at least two years, Arpita. No short term jobs as the cost of retraining is very high for us. They stay 24 months and get a brilliant recommendation for their B-schools. If they quit sooner, they get nothing, make that clear.
Ashok Vatsa (director): And you think this work experience (WE) at B&T matters?
Megha: B-schools have begun to demand WE. If I was a student I would somehow get the WE, as the whole take-away from a B-school is significantly different if you have the WE.
Vivek: When I taught a module  on CRM for Aspen Business School. I did not use text books and such. I just stood there and taught. Now, the class had both kinds of students: those with WE and those without. Some students who had WE would ask ‘how do you’ questions, related to their experience with the subject. But those without WE, rated me real bad. They wanted work sheets, they wanted hand outs, they wanted something to learn and memorise, a book to study from. Then looking at our PPTs they wanted to know if they would be asked questions based on the PPT!

When I said the questions will be very application based, you will be judged on the principles, they were sorely upset. They wanted a text book.
There are no fixed answers — that was the message I was giving them, but they were brought up on set rules, and felt safe in format, in prescriptions, in scaffolds. They could not churn the lesson and draw a multiplicity of learning from it. This, I say is a function of education that tests memory and restricts thinking. And many get in through the crack... won’t these sorts contaminate the system and pull down students who have an unhindered mind?
Ashok: But that is the kind of people you are going to get... The system today delivers students who are not assessed for strategic thinking. With what confidence then, do you hire a person who says he got a 98 per cent in his boards? (Looking at Arpita) What kind of candidates do you have in your shortlist?
Arpita looked towards Vivek unsure if she should even reply. Then she said, “It is a mixed bunch. Many are top scorers at school level, but in their essays they do not all show adventure. I have been thinking about calling a fair mix and interviewing them individually.
Meghna: Arpita had shown me the CV of an interesting young lad. No, no, not from one of the top colleges, no way. Arpita, just share what you told me about that boy Joseph?
Arpita: ...yeah, about 80 per cent in his Boards; the cut offs were very high for the better colleges, so he joined some college in Umeed Nagar. But what I found admirable was that he has not been sapped by this; he has conducted a youth festival all on his own, he plays for his college, has his own band that performs at Khyber....
Vivek: There will always be hundreds such who are good in many things, but I am looking for a consultant. People have to be hardworking. It is a pre-requisite, not a qualification.
Nuts and bolts, I would say poor marks at 12th grade is bad news. My ex-boss used to say when hiring look at just 2 things: 12th grade marks and family.
Meghna: That’s absurd. How hard a person is willing to stretch, matters. People feel life owes them a favour. Many students demand things as a matter of right. My nephew was asked by a foreign university at the interview, ‘Tell us why should you be granted this admission. What is special about you? Right now, you only have shown ability to pay the fees because your father is rich and students like you form less than 5 per cent of India. But what have you done for India?’
Ashok: So, Meghna is saying be not a cribber but a get-up-and-goer. So if the system doled out poor marks even though you worked very hard, are you sulking and moping or do you have the resilience to dust your back and bounce back, like whats-his-name Joseph? A distinctive ability to survive by working extra hard at their life.....
Vivek: These are in the realms of subjectivity. I feel when it comes to hiring one must not apply subjective likes and dislikes. How can we assess if someone is resilient or not when we don’t know the person beyond what his CV says? Will I take that risk for the firm? I am not sure. Then again, can the duality of our minds be applied to hiring people? I feel firms should have templates for human resources and simply hire according to template.
Ashok: Where is subjectivity here? To say people from good families are good is subjectivity. But this Joseph who scored 80 and not the fashionable 100 hence could not get admission, could have felt he deserved the 100 and carried that disappointment to self destructive levels. Instead what he did is celebratory! How is this subjective ‘like’ or ‘dislike’? Business needs survivors! He worked much harder to beat the rut he had been pushed into; much, much harder to remain relevant, because he would have figured that he needs to pole-vault to attain what he has lost owing to the whimsical methods of the colleges. And he did it. He seems to have not allowed judgement and society keep him down.
I would watch out for this guy, he is definitely interesting... he is definitely worth short listing. (to Arpita) Ok, ok, I am not asking you to, but I am debating the arguments now.
Meanwhile a confused  Soham  said to Madhav, “After so much talk, he is still not saying ‘hire Joseph’! So, what is the firm’s view on this?”
Madhav: Tu pooch na? Ask, ask, it is your client...and just when it seemed like Meghna had an answer, Ashok stood up and pushed his chair noisily so that it was not clear what she said, but Vivek was shrugging and saying, “That is life, it is about risks...” which was neither here nor there.