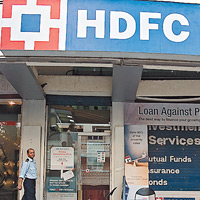 08 November, 2014
Print this article Font size -16+
US private-equity firm Carlyle Group is selling its 3.7 per cent stake in India's top mortgage lender Housing Development Finance Corp Ltd in a deal to raise as much as $861 million (approx. Rs 4,391 crore), according to a term sheet seen by Reuters on 4 October.

At the top end of the price band, the deal would raise $861 million, making it India's fourth-largest equity deal this year.

Sources told Reuters in February that Carlyle had sold a quarter of its stake in HDFC, raising about $270 million and nearly doubling its 2007 investment in the mortgage lender.

The latest sale marks an exit from the Indian company for Carlyle, which owned 5.2 percent of HDFC and was its No. 2 shareholder before February's divestment. HDFC is valued by the stock market at nearly $23 billion.

Earlier this year, Citigroup also sold its 9.9 per cent stake in HDFC for $1.9 billion as global banks focus on shoring up their balance sheets to meet stricter capital requirements.

Carlyle's sale of 57 million HDFC shares was launched late on Thursday and the deal will be executed at the Indian stock exchanges on Friday morning, a source with direct knowledge of the situation told Reuters.

The share sale comes after a slew of such deals in the Indian market since the beginning of 2012, as investors take advantage of stock market gains to reduce their holdings or exit their India portfolio companies.

The BSE Sensex is up about 23 percent so far this year.

Malaysia's state investment arm Khazanah Nasional sold shares worth about $105 million in Yes Bank in March. Others such as Warburg Pincus and Temasek Holdings have also cut their stakes in Indian financial services companies this year.

Total proceeds from share sales in India in the first nine months of 2012 were $8.9 billion from 59 deals, a rise from $8.3 billion in the same period last year, according to Thomson Reuters data.

Citigroup, which topped the India equity market league table in the Jan-Sept period with a 43 per cent market share, is the sole bookrunner for Carlyle's sale of HDFC shares, the term sheet showed.