New Delhi [India], August 18 (ANI): Singer Cardi B has given a token of love -- apparently a customised Hermes Birkin bag -- to her co-singer Megan Thee Stallion after the instant-viral success of their collaborative song 'WAP'.
The two powerhouses of rapping teamed up together and delivered an on-beat track 'WAP' on August 7, which in days racked much attention of music enthusiasts.
As a gesture of thanking her co-singer, the 'I like it' singer gifted the 25-year-old, Stallion, an orange Hermes Birkin bag which has prints of white tiger, water droplets and even Thee Stallion herself. The design of the bag goes with the theme of the 'WAP' music video.
The bag was shown in an Instagram post shared by Stallion and expressed her happiness. 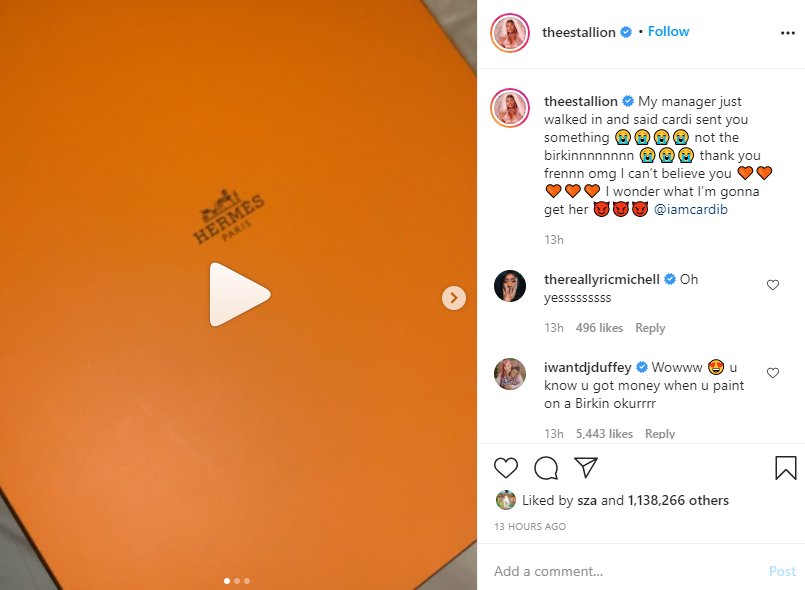 "Thank you frennn omg I can't believe you, I wonder what I'm gonna get her" Stallion captioned the post.
The backside of the bag have words "Be Someone" written, and as a side note Cardi wrote: "Thank you Meg, really appreciate you!"
The official music video the two hip-hop stars are seen as near-identical twins, pulling off similar hairdos. With the twisted tower of curls, the rappers are seen channelling the 90s glam, with winged eyeliner and glossy lip shades.
The music video is shot at a grand, luxurious mansion with a fountain in the front featuring statuettes. (ANI)