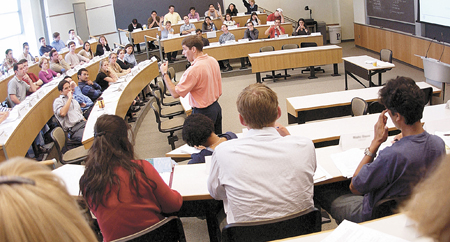 The Ministry of Human Resources and Development and the Ministry of Economic Affairs have allowed 100 per cent FDI in education since 2002. But investments have not come in due to several reasons. First, any entity setting up a school or college or a deemed university has to be a non-profit organisation. This means that the promoter cannot earn a dividend and since trading is not allowed, even the share capital is not of much use.

Second, any not-for-profit entity receiving foreign funds (under Foreign Contribution Regulation Act) has to comply with stringent guidelines, as per the Ministry of Home Affairs. "Since all education entities come under private trusts, such rules discourage educational institutes from tapping foreign funds," says Ramana.

But such handicaps are being sought to be addressed via alternate routes. In May 2011, the Ministry of Economic Affairs declared that when education is structured in the PPP format (public-private partnership), an educational project in its entirety can be classified as an infrastructure project and all the benefits of that classification can be used for viability gap funding and long-term financing. "It makes sense as it is much easier to get infrastructure funding. Any trust with a land bank can approach foreign investors and investors earn a financial return in due course," says Ramana. Adds Amitabh Jhingan, partner at Ernst & Young: "This amendment will allow more players to build education infrastructure with foreign capital being available to fund these assets. Hopefully, there would be more education capacity created as a result."