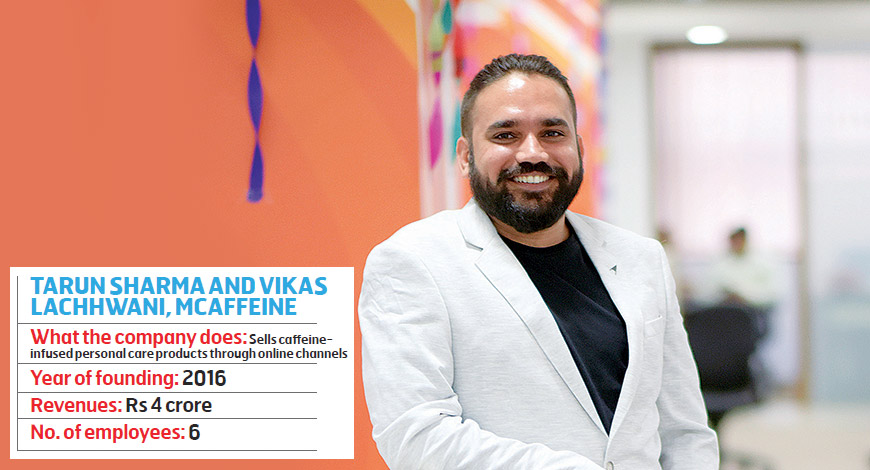 Tarun Sharma’s first eureka moment for an FMCG business came when he got slammed with a sore eye in April 2016. A roommate suggested a mask of green-tea bags that would de-puff his eyes and allow them to open. The ingredient that worked like magic on his eyes was caffeine. That seeded the idea of caffeine-infused personal care products because caffeine has amazing skin care properties. On skin, it normalises the puffy eye, it is a UV blocker, an anti-oxidant, and has anti-ageing properties.

After a lot of research, a series of experiments and armed with Rs 50 lakh as capital, Sharma and his partner Vikas Lachhwani launched their first products in the fast-moving consumer space in October 2016. Their first batch of nearly 800 kg of products, which they formulated, included face wash, body butter, hair cream, face cream and shower gels. Initially, sales were slow to pick up, but soon through online marketing and community building, the duo and their six member founding team slowly built MCaffeine into a Rs 4-crore annual business in less than a year.

Besides, Sharma and Lachhwani also had a thesis that to build a new brand in the FMCG space, it had to pass a three-layer test. The first had to be the product, and it had to be good. Second, it should fit in a segment, which means that it had to serve a niche. Third, a strong psychological connect. This is where ‘caffeine-infused’ FMCG products looked like a perfect idea as the products had a niche, and had an instant connect with the youngsters due to their caffeine lifestyle.

Sharma and Lachhwani were pretty clear that they had to keep the products online and be profitable at the unit level right from the start. So all the heavy-capital intensive side of the business could be dedicated to areas such as manufacturing and distribution. Distribution was done through an online model and through platforms such as Amazon, Nykaa, and Flipkart. MCaffeine is now distributed through over 30 e-commerce websites, including their proprietary webstore.
In fact, the caffeine-infused brand has now made it onto Amazon’s Launchpad programme that selects innovative products and startups from around the world, which makes MCaffeine one of the select few to have made it on the platform from India.

So far, MCaffeine has served more than 1 lakh customers, and that number is only increasing. Initially, starting off with six products, the company now has launched 16 products. Mcaffeine is also pitching its products in the premium price category.

In fact, MCaffeine raised Rs 2 crore from top investors last year. With three manufacturing units, and four distribution centres, MCaffeine wants to deliver within 24 hours to new customers. Now plans are on the anvil to introduce eight new products, which will take the run rate of this new personal care brand to Rs 12 crore in a year. For investors and consumers, it’s time for a caffeine-high.