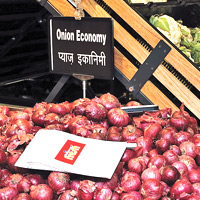 08 November, 2014
Print this article Font size -16+
The cabinet on Wednesday (20 August) cut the minimum export price for onions by 30 per cent, relaxing some of the curbs imposed on overseas shipments in the past two months to augment domestic supplies and rein in soaring prices.

The minimum export price was first raised to $300 per tonne in mid-June after fears of domestic shortages, fuelled by a scorching summer, drove up local prices. It was further increased to $500 per tonne in July to discourage exports.

Prasad said the review was prompted by an improvement in domestic supplies and a moderation in prices.

Indians consume about 15 million tonnes of onions a year, using them as the base for curries and traditional dishes such as biryani and bhaji. In the past, higher onion prices have contributed to the fall of state governments.

The South Asian nation exports about 1.5 million tonnes of onions a year.