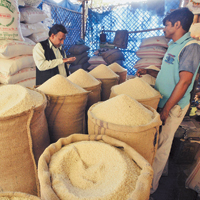 08 November, 2014
Print this article Font size -16+
The government on Tuesday, 19 March 2013, approved the revised Food Security Bill to provide for uniform 5 kg of foodgrains per month per person at a highly subsidised price of Rs 1-3 per kg to two-thirds of the country's population.

However, about 2.43 crore poorest of the poor families covered under the Antyodaya Anna Yojana (AAY) scheme under PDS would get legal entitlement to 35 kg of foodgrain per family per month.

"Revised Food Bill has been cleared. We will try to bring the amendments to the Food Bill in Parliament before Friday," Food Minister K V Thomas told reporters here after the Cabinet meeting.

The extra burden on the food subsidy would be about Rs 20,000 crore from the current level, while foodgrains requirement is expected to be 61.23 million tonnes, he added.

"Uniform prices of Rs 3, 2 and 1 per kg for rice, wheat and coarse grains, respectively, will be applicable to all eligible beneficiaries. The prices would be revised after three years from the implementation of the Act," he said.

In the original bill, introduced in the Lok Sabha in December 2011, beneficiaries were divided into priority and general households.

Priority households were entitled to 7 kg of rice, wheat and coarse grains per person per month at Rs 3, Rs 2 and Re 1 per kg respectively. At least 3 kg for 'general' households at 50 per cent of support price.

The amendments to the bill have been done in line with the Parliamentary Standing Committee report that suggested doing away with dividing beneficiaries into two categories.

The panel had advocated uniform monthly entitlement of 5 kg grain per person at uniform price.

Earlier, sources had said that more than 55 amendments have been proposed to the Bill.

Under the current public distribution system (PDS), BPL and AAY families get 35kg of foodgrains per month, while the allocations for APL families range between 15kg to 35kg.