New Delhi [India], October 26 (ANI): India's Case Fatality Rate (CFR) of COVID-19 has touched 1.5 per cent, the lowest since March 22 and is continuously declining, said the Union Ministry of Health and Family Welfare (MoHFW) here on Monday.
"India has one of the lowest fatality rates in the world. The case fatality rate is lowest since March 22 and is continuously declining. Less than 500 deaths (480) have been reported in the last 24 hours in the country," the ministry said in a release.
With 480 new deaths, the COVID-19 toll mounted to 1,19,014, as per the Union Health Ministry.
According to the World Health Organisation, CFR is a measure of the severity of a disease and is defined as the proportion of reported cases of a specified disease or condition, which are fatal within a specified time. 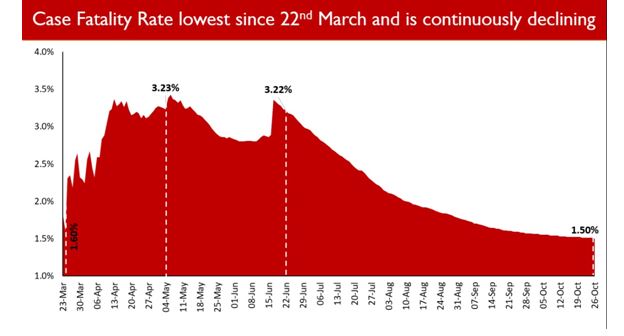 Collaborative efforts of the Union and State and Union Territory (UT) governments have resulted in the strengthening of the health facilities across the country, the Ministry stated.
"As many as 2,218 dedicated COVID hospitals are providing quality medical care. Till date, 25 tele-sessions have been held and 393 institutions across 34 states and UTs have participated in them. As a result, there are 14 states and UTs with CFR lower than 1 per cent," it said.
The ministry said the COVID-19 recovery rate stands at 90.23 per cent after 59,105 new recoveries were added in last 24 hours taking the total number of recoveries to 71,37,228).
"India continues to report a trend of steadily decreasing active cases. Presently the active cases comprise merely 8.26 per cent of the total positive cases of the country standing at 6,53,717. This is the lowest since August 13 when the active cases were 6,53,622," Ministry said.
According to the Ministry, a total of 45,148 new confirmed cases were registered in the last 24 hours in the country, the lowest since July 22 when 37,000 new cases were added. (ANI)