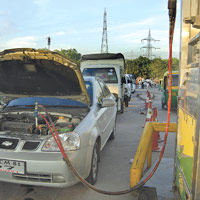 08 November, 2014
Print this article Font size -16+
CNG price in the national capital was cut by a steep Rs 14.90 per kg and cooking gas piped into kitchens by Rs 5 per unit with effect from midnight tonight.

Compressed Natural Gas, or CNG, will cost Rs 35.20 per kg from tomorrow as against the current rate of Rs 50.10 per kg.

Rates of piped natural gas (PNG) that households use for cooking, was cut by Rs 5 per standard cubic meters (scm) per day. This is the first reduction in fuel rates in almost six years. CNG rate was cut in March 2008 when prices were cut by 30 paise following a reduction in excise duty.

However, the relief may be temporary, as the domestic natural gas prices will almost be doubled to $8-8.2 from April 1. The rate hike may translate into a CNG price increase of Rs 10.6 per kg and PNG rates of Rs 8/scm.

PNG rate cut was for both the consumption slabs.

Simultaneously, Indraprastha Gas Ltd - the firm that retails CNG and PNG in the national capital region, announced 20 per cent increase in quantity in the lower consumption slab.

The rate cut follows oil ministry's decision to give city gas distribution firms cheaper domestic gas to meet all their needs for CNG and PNG supplies compared to the previous limit of 80 per cent for most states.

Due to differential tax structure in Uttar Pradesh, the applicable price of domestic PNG in the lower slab to households in Noida, Greater Noida and Ghaziabad would be Rs 26.20/scm upto consumption of 36 scm in two months. This has been reduced from existing Rs 31/scm for consumption upto 30 scm in two months.

Announcing the reduction in prices of CNG and domestic PNG, IGL Managing Director Narendra Kumar said, "Subsequent to the increase in our domestic gas allocation to meet the full requirement for CNG and domestic PNG by the government, IGL has decided to pass on the entire benefit to its esteemed consumers by reducing the consumer prices."

Thanking the government for ensuring that all city gas distribution (CGD) companies get their full requirement from domestically produced gas, he said that this step would reduce the cost of commuting for the public apart from contributing to the environment.

With the revised price, CNG would offer 65 per cent savings towards the running cost when compared to petrol driven vehicles at the current level of prices.

When compared to diesel driven vehicles, the economics in favour of CNG at revised price would be 36 per cent, the statement said.