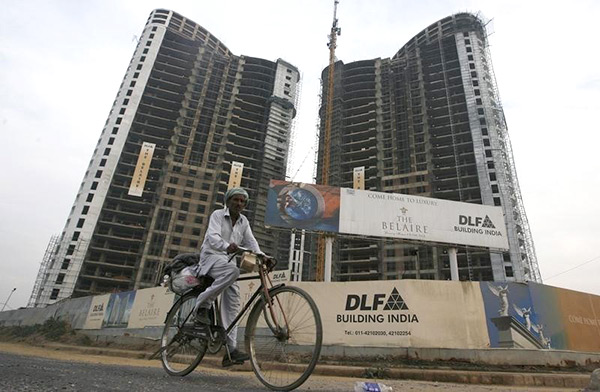 22 May, 2015
Print this article Font size -16+
In a fresh order against DLF, Competition Commission has found the realty giant guilty of indulging in “unfair and abusive” business practices in sale of apartments in a Gurgaon housing project.
CCI has asked DLF Gurgaon Home Developers Private Limited and its group companies to “cease and desist” from such unfair trade practices, but did not impose any fresh monetary penalty as Rs 630 crore fine has already been slapped on DLF for similar violation during the same period in a separate case.
“The Commission directs the Opposite Party and its group companies operating in the relevant market to cease and desist from indulging in the conduct which is found to be unfair and abusive,” the fair trade regulator said in its order.
The direction follows complaints filed with CCI against DLF Gurgaon Home Developers, wherein it was alleged that the company had lured home buyers to book apartments at “very attractive” rates in DLF New Town Heights project under a pre-launch scheme.
After the complainant booked the apartments and made the initial payments, they were asked to make payments under an instalment plan and were asked to pay the money on different dates as per the demand.
However, they did not make the payments as “there was no sign of construction/development at the Project site.”
Later, they sought cancellation of allotment and requested for refund of the amounts paid by them, which the developer refused to do, saying that applications signed by buyers were irrevocable and the request for cancellation cannot be acceded to.
The buyers were also told that the only option available with them was to sell the property in open market, as per the CCI order.
After two years of booking, that is in February 2010, the company informed the buyers that the foundation work had been completed and they were required to make payments as per the plans.
Subsequently, the complainants approached CCI alleging abuse of dominant position by the company and the fair trade regulator ordered a probe by its investigative arm.