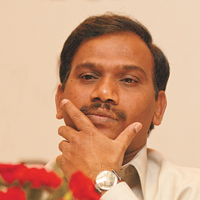 The Central Bureau of Investigation (CBI) raided Sanchar Bhawan, which houses the communications ministry and the department of telecommunications (DoT), on Thursday. CBI is investigating a case of alleged undue favour to a few telecom companies in allocation of spectrum — airwaves that carry voice and data from mobile phones — in 2007.

"It has been alleged that there had been serious irregularities in the award of Unified Access Services Licenses (UASL) to private companies. As per information received, there was criminal conspiracy between certain officials of DoT and private persons/companies and others in order to award licenses to these companies by putting a cap on the number of applicants against (the) recommendations of Telecom Regulatory Authority of India (TRAI) and by awarding licenses to private companies on first-come-first-served basis on the rates of 2001 without any competitive bidding," a CBI statement said.

Unitech Telecom, Swan Telecom and Loop Telecom had won bids for UASL licence in 2007 and were awarded spectrum and licence. Meanwhile, Telecom Minister A. Raja, who was the telecom minister at the time of allotment of licences and spectrum, hastily called a press conference late on Thursday evening to say that he followed the same rules in spectrum allocation as his predecessor Dayanidhi Maran. Raja has been under attack by opposition parties, both inside and outside Parliament.

The question everybody is asking is: why was Raja's headquarters at Electronics Niketan spared, if the CBI was really keen on getting to the bottom of this controversy?