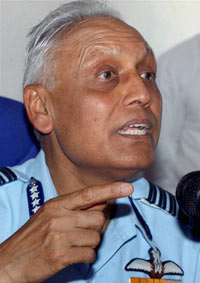 08 November, 2014
Print this article Font size -16+
The Central Bureau of Investigation (CBI) team probing the AgustaWestland bribery case raided homes and business premises in New Delhi and two other cities on Wednesday, 13 March, 2013, after formally launching a probe into the helicopter firm and its parent company, Finmeccanica.

Two new names, which were not part of the agency's preliminary enquiry, have also been included in the FIR. They include brother of former Union Minister Santosh Bagrodia, Satish Bagrodia and Pratap Aggarwal, Chairman and Managing Director of IDS Infotech respectively.

Tyagi is first Chief of the Indian Air Force to be named in a corruption or criminal case by the CBI.

CBI sources said provisions of Prevention of Corruption Act have also been slapped in the FIR filed by the agency.

The government will take the "strongest possible action" if the CBI finds wrongdoing, junior defence minister Jitender Singh told parliament as the raids were under way.

The CBI said it had registered a criminal case under India's anti-corruption laws and named Italian defence company Finmeccanica and its Anglo-Italian unit, AgustaWestland, as targets of its probe.

Finmeccanica and AgustaWestland have denied paying bribes in a $750 million contract awarded in 2010 to supply a dozen AW 101 helicopters for Indian political leaders. Italian police have arrested the head of Finmeccanica, Giuseppe Orsi, in connection with the case.

The CBI said in a statement that four firms and 12 individuals, including former Indian air force chief S.P. Tyagi, were being investigated. A man who answered Tyagi's telephone said the retired military officer was not taking calls. Tyagi has previously denied any wrongdoing.

The CBI said searches were carried out at 14 locations, including the offices of Aeromatrix, one of the companies named in a separate bribery inquiry by Italian prosecutors. Contacted by telephone, Aeromatrix CEO Praveen Bakshi said he was too busy to talk.

No arrests had been made so far, she said. The CBI has already questioned many of the Indians involved in the case. The formal registration of the inquiry now allows the agency to make arrests and to ask Italy and Britain for more information.

Italian prosecutors accuse Orsi of paying bribes to intermediaries to secure the helicopter deal when he was head of AgustaWestland. They allege the middlemen paid Tyagi to change technical specifications in the tender to favour the company. Orsi has denied any wrongdoing.

India has frozen payments for the helicopters pending an inquiry by the CBI and has said it is seeking to cancel the deal. It has already taken delivery of three of the aircraft.

Indian Defence Minister, A.K. Antony, who has previously threatened to cancel the deal and blacklist the companies and has faced a barrage of opposition questions in parliament over the case, struck a more cautious note on Wednesday.

"The CBI is investigating the matter. I do not want to say anything at this point of time," he told Reuters in parliament.

Antony asked the CBI to investigate the allegations for the first time last month despite the fact that they first surfaced a year ago. He has complained that Italy rebuffed Indian requests for information on a judicial investigation into the bribery allegations.

The case has put pressure on Prime Minister Manmohan Singh whose government has been buffeted by a string of graft cases. The ruling Congress party is expected to face a tough fight for a third term in office in elections due by 2014.

In recent years, India has emerged as the world's largest weapons importer, but procurements are periodically held up by allegations of corruption. Finmeccanica could be blacklisted in India for at least five years if investigators prove bribery.