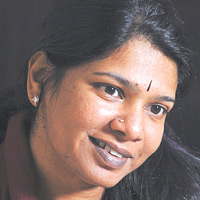 The fresh charges coincided with the arrest of Suresh Kalmadi in connection with a graft investigation in the Delhi Commonwealth Games, which were held in October last year.

Kanimozhi, the daughter of the regional Dravida Munnetra Kazhagam (DMK) party's head and herself a lawmaker, was summoned to appear before a CBI court on May 6, along with Sarath Kumar of Kalaignar TV Channel, owned by the DMK, and Karim Morani of Cineyug.

DB Realty's Asif Balwa and Rajiv Agarwal were also summoned to appear in court on April 26 in connection with the 2G licensing scandal that has rocked investor sentiment in Asia's third-largest economy.

Kanimozhi was charged with section 7 and 11 of the Prevention of Corruption Act. The sections deal with acceptance of alleged gratification.
Kanimozhi, Sarath Kumar and Morani were charged with handling bribes in a licensing scandal that CAG said may have deprived the government of $39 billion in potential revenue.

Months of corruption scandals have battered the Congress party-led government, stymied its agenda for economic reforms and fed a sense of regulatory uncertainty in the world's fastest growing mobile phone market.

The CBI told the court that Rs 200 crore connected with the 2G spectrum scam had travelled from a partnership firm of Swan Telecom Promoter Shahid Usman Balwa to Kalaignar TV Pvt Ltd.

Besides former telecom minister A Raja, the agency had named eight others and three telecom companies in its first charge sheet.

The agency which in the first charge sheet had said the money travelled through a "circuitous route" through Kusegaon Fruits and Vegetables Pvt Ltd, a DB group company and Cineyug Films Pvt Ltd, has maintained the position in the second charge sheet.

"Investigations have revealed that in furtherance of the conspiracy, Dynamix Realty, a partnership firm of DB Realty Ltd and other DB group companies, paid Rs 200 crore to Kalaignar TV Pvt Ltd during December 2008 to August 2009, following a circuitous route through Kusegaon Fruits and Vegetables Pvt Ltd and Cineyug Films Pvt Ltd (DB group holds 49 per cent equity in it)," CBI had said in its first charge sheet filed on April 2. The CBI, in its first charge sheet filed on April 2, had said former telecom minister A Raja conspired with top bureaucrats, including a retired IAS officer, and corporate honchos to cause a loss of Rs 30,984 crore to the exchequer in the allocation of 2G spectrum.

The agency had alleged former telecom secretary Siddharth Behura, Raja's personal secretary R K Chandolia and Swan Telecom promoter Shahid Usman Balwa and Sanjay Chandra, MD of Unitech wireless, entered into a conspiracy for manipulating the procedure for allocation of spectrum with the aim of favouring companies like Swan Telecom and Unitech.

The CBI had charged Raja with cheating, forgery and abuse of official position under the provisions of Indian Penal Code and Prevention of Corruption Act.

All the nine accused, named in the first charge sheet, are presently in Tihar Jail under judicial custody.

Future Of Cong-DMK Alliance
The south India-based DMK party is a member of Singh's government, helping it maintain a slim majority in parliament.
The two parties jointly govern Tamil Nadu and the telecoms scandal could drain support for the state coalition in the staggered election, results of which are due on May 13.

The DMK, which has denied any wrongdoing, has threatened to pull ministers out of the government if members of the family that heads the party were charged, according to media reports.

In a sign of fraying ties, the DMK threatened to pull out from the government in March in a row over seat-sharing arrangements in the Tamil Nadu election.

However, analysts question whether the DMK would act on such a threat, given that it needs Congress's clout in the state as much as Congress needs the DMK's 18 seats to maintain its majority in the parliament.

Police investigating the telecoms case say companies connected to the DB Group funnelled millions of dollars to a television channel owned by the family that runs the DMK party.

Those charged in the ongoing telecom case have denied any wrongdoing.