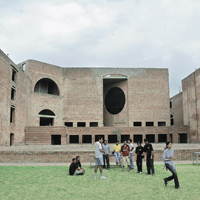 Its disastrous brush with the computer-based format has taken some sheen off the Common Admission Test (CAT). The examination, being conducted by Ahmedabad (IIM-A) this year,  forms the basis for admission to IIMs and other premier business schools in the country. But the delay in the announcement of results is forcing many institutes to revisit their admission strategy. The results are expected only around the third week of February instead of the usual third week of January.

The Mudra Institute of Communications, Ahmedabad (MICA), which usually considers CAT and Graduate Management Admission Test (GMAT) scores for first level of sifting of applications, has decided to ignore CAT this year. According to Deval Kartik, admission coordinator at the institute, all students are being asked to take MICA’s own entrance test to avoid delay in admission.
The delay apart, doubts are also being raised about the efficacy of the entire CAT exercise. According to experts, nobody knows what the databank of questions was like. In a computer-based format, the computer picks up questions from a databank, which means not everybody gets to answer the same set of questions. Students, as well as institutes, fear that those who took the examination towards the end of the window period for testing, or even those who are going to take the retest on 30 and 31 January, may have an unfair advantage as they would know what to expect.
Hence, to avoid wrong selection of candidates, institutes such as the Institute of Management Technology, Ghaziabad, have decided to reduce the weightage of CAT scores in the admission process from 50 per cent to 30 per cent. According to sources at the institute, now more weightage will be given to group discussions an d personal interviews.
Many institutes that usually do not take into account scores of tests such as Joint Management Admission Test (JMAT), Management Aptitude Test (MAT) and GMAT, have decided to consider them this year. The most popular is GMAT for it is recognised in many foreign institutes. And despite the fact that GMAT costs more than CAT — around Rs 12,000 ($250) compared to CAT’s Rs 1,500 —  its popularity has grown exponentially over the years.
According to the US-based organisation Graduate Management Admission Council, which has developed GMAT, the number of candidates in India has grown 128 per cent over the past five years. CAT should ensure that the rescheduled tests are glitch-free to salvage some reputation.
(This story was published in Businessworld Issue Dated 01-02-2010)
Tags assigned to this article:
magazine gmat mat online cat aspirants shalini s sharma iim a mica jmat