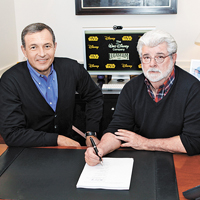 08 November, 2014
Print this article Font size -16+
Is The Walt Disney Company’s decision to buy ‘Star Wars’ maker Lucasfilm for $4.5 billion part of the US film studio’s quest for global supremacy? Many think so. In 2006, the media conglomerate bought animation studio Pixar, which George Lucas, the filmmaker-producer who owns Lucasfilm, had founded and, later, sold to Apple’s Steve Jobs. Disney did not stop there. Just three years later, it took over comics maker Marvel Entertainment for $4.2 billion. In the latest deal, Disney will offer Lucas 40 million of its shares and a truckload of cash. For fans of the six-part franchise ‘Star Wars’, the buyout offers a chance to see yet another sequel, says Disney. Star Wars Episode 7 will hit screens in 2015. That said, movies are not a big revenue churner for Disney. Last year, sports television network ESPN brought in about $19 billion of Disney’s $41 billion revenues, with its theme parks at about $12 billion. The film studios stood third with over $6 billion. Perhaps, Lucasfilm, which also owns the Indiana Jones franchise, along with all those fiery aliens can change the order.
A Bumpy Road
India’s largest carmaker Maruti Suzuki saw its net profits fall 5.4 per cent in the September quarter, due to, among
others, the recent labour unrest at its plant in Manesar, Haryana. The company’s increased promotional spending to ramp up sales in a dull market too took its toll. That said, Maruti’s scrip remained unscathed, signalling investor confidence in the carmaker which saw a production loss of 77,000 units in the latest workers strike. Net profits fell to Rs 228 crore from Rs 240 crore a year ago. While operating profits went up 15.4 per cent, higher depreciation (30.4 per cent) hit net profits. But revenues rose 8.5 per cent to Rs 8,070 crore.
The Last Resort
In an attempt to cut losses, hospitality major Hotel Leela Venture plans to raise Rs 700 crore by selling its non-core assets, most likely its land in Hyderabad, Pune, Bangalore and a business park in Chennai. The company, promoted by Captain CP Krishnan Nair, recently went for a debt rejig to manage its debt of Rs 4,000 crore. Meanwhile, the group is coming up with its ninth property in Noida.
Foreign Hand
Is the Genpact show losing sheen? The largest business process outsourcing (BPO) firm in the country saw its profits fall 47.5 per cent to $25.2 million in the September quarter, while revenues increased 14.3 per cent from a year ago and 5 per cent from the past quarter to $491.2 million. The company pegged the fall to the impact of a “foreign exchange remeasurement loss” and expenses related to the special cash dividend.
Picking Up Pace
There is good news from the manufacturing front. India’s manufacturing sector saw robust action in October, from
a 10-month low a month ago, according to the widely-tracked HSBC manufacturing purchasing managers’ index. The index measures the business activity of India’s factories. It moved up to 52.9 in October from 52.8 in September thanks to a pick-up in new orders and an easing of price pressures.
Epic Merger
In a mega deal that is expected to complete by the end of 2013, global publishing giants Penguin and Random House decided to merge with each other. Now Penguin Random House, with revenues of $3.8 billion, will become the biggest consumer book publisher the trade has ever known. Bertelsmann, owners of Random House, will control 53 per cent of the combined entity, while Penguin owners Pearson will hold 47 per cent.
Riding Up
Two-wheeler maker Honda Motorcycle & Scooter India posted a 41 per cent jump in sales for October at 250,606 units. The company’s sales stood at 178,181 units in October last year. Motorcycle sales jumped 70 per cent to 121,832 units from 71,509 units in October 2011.
Smart Move?
Lenovo is the latest of the computer makers to enter the lucrative and highly competitive smartphone market. It has launched five Android-based smartphones in India.