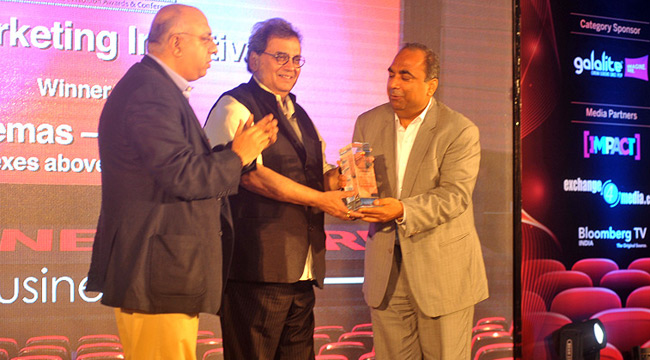 22 May, 2015
Print this article Font size -16+
In a gala event attended by the who's who of the Cinema Exhibition industry at the ITC Grand Central on Friday (15 May), BW Businessworld concluded the inaugural edition of their pioneering initiative titled: The Fridays.

The power packed conference started with a lineup of interesting sessions and esteemed speakers from the film making businesses.

The closing remarks of the conference were delivered by Ajay Bijli, Chairman & Managing Director, PVR Ltd.

The evening saw the winners being felicitated by Annurag Batra alongwith the Chief Guest and the Jury Chairperson: Subhash Ghai and Manmohan Shetty respectively

The winners were selected based on entries sent by them after much deliberation by an esteemed jury across diverse categories like marketing initiatives, fastest growing chains, new properties developed, programming & business innovation and best theater chains regionally as well as nationally. Bagging the award for the Best Theater Chain in the National Category for the sub strata of multiplexes above was PVR Cinemas, while the winner in the strata of multiplexes below 20 screens saw Miraj Cinemas lift the trophy whereas the Single Screen winner for this category was Raj Mandir Cinemas of Jaipur.

Subhash Ghai was also felicitated by BW Businessworld for his Pioneering Contribution to the Field of Cinema Education for setting up a state of the art institute Whistling Woods by braving heavy odds.

BW Businessworld is a three decade old magazine at the forefront of business journalism with its stories that have consistently anticipated trends.
Tags assigned to this article:
businessworld manmohan shetty annurag batra subhash ghai