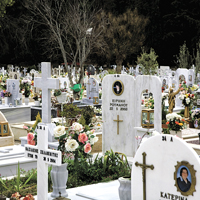 It might sound a bit eerie, but Indians are going to play a crucial role in burying the dead in Europe. After a lull of three years, India will resume export of gravestones. In 2006, the local church of Germany, which used to buy stones from India every year, banned usage of Indian stones for cremation after allegations were made by NGOs that child labour was used in tombstone units. Most of the units are based in Andhra Pradesh, Karnataka and Tamil Nadu.

Following this ban, several orders from Germany were cancelled. Indian exporters led by R. Veeramani, chairman of Indian Monument Manufacturers' Association (IMMA), filed a suit in a local court in Germany. In June 2009, the court asked the German government to solve this by getting Indian stones certified. And IGEP (Indo-German Export Promotion Council) Foundation was roped in to certify Indian exports that no child labour was involved. For this service, IGEP will charge 0.25 per cent of the export value from the Indian exporters and 0.75 per cent from the European importers, says Dietrich Kebschull, chairman of IGEP Foundation.

Indian stones are popular for their Mughal, Persian, Kashmiri and Deccan style of craft work. They are in great demand in the UK, Germany, Austria, Hungary, Czech Republic, Spain, etc. According to IGEP Foundation and IMMA estimates, India exports tombstones worth Rs 850-1,000 crore annually and has 80 per cent market share. India's competitors are China, Japan, Australia and the US. One container of stones costs anything between E1,500 and E2,300 (Rs 1,03,984 and Rs 1,59,405).