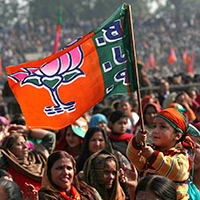 08 November, 2014
Print this article Font size -16+
A backbencher in West Bengal politics, the BJP has signalled its arrival in a big way by displaying a stellar performance in the just-concluded Lok Sabha elections, seeking to change the political equations in the state.

Not only did it bag the two prestigious seats of Darjeeling and Asansol, it also emerged second in three other seats of Kolkata South, Kolkata North and Maldaha South.

Above all, the party cashing in on pro-Narendra Modi sentiment has secured more than a 17 per cent vote share, it's all-time best. The maximum it had got previously was 13 per cent in 1991 on the back of the Ayodha Rath Yatra.

In the 2009 Lok Sabha election the party had secured just 6.15 per cent votes.

The party increased its vote share by eating into the voter base of the Left Front, in the process relegating the once-formidable force in West Bengal to a third spot.

Not surprisingly, the state and central leadership of the party are eyeing a close battle with the Trinamool Congress in the 2016 Assembly election to cement its position.

Political analysts feel that if the BJP maintains the momentum, the party could be able to change the four-decade-old political equations in the state.

"The party's highest leadership has already conveyed to me that the party should build up on this performance with an eye on the 2016 Assembly polls in the state. The next Assembly poll will be fought between Mamata and BJP," BJP spokesperson in charge of Bengal Siddharth Nath Singh told PTI.

Singh, one of the main architects of BJP's good performance in the state, feels that the anti-Mamata votes will land in BJP's fold in the absence of the Left as a credible opposition force.

The CPI(M)-led Left Front is facing a crisis of political existence in Bengal, the vote share having dipped from 43.66 per cent in the last Lok Sabha to 29 per cent in 2014.

The major chunk of its vote share has been eaten up by the BJP.

Since the 2011 Assembly polls, which witnessed change of guard, both the BJP and RSS have been making steady inroads in Bengal, especially rural parts of the state, which was reflected in several by-polls and municipal elections in the state in the last three years.

BJP's spectacular rise can be gauged from the fact that the party had finished third in 29 seats out of 42 parliamentary constituencies in the state.

Most significantly, the party took a lead in 24 Assembly segments and emerged second in atleast 25 others, which might indicate things to come in the 2016 Assembly election.

"BJP will build on this performance to become the principal opposition party in 2016 aided by Modi's development work," said Bandopadhya.

What came as a big surprise, BJP Kolkata South candidate Tathagata Roy maintained a lead in the Bhowanipore Assembly segment represented by Chief Minister Mamata Banerjee in the Assembly.

The lone BJP candidate Badal Bhattacharya had won a seat in the state Assembly from Asoknagar in 2001.

The RSS, from which BJP draws its cadre and support base, has also increased its activities in Bengal. RSS Chief Mohan Bhagwat was in north Bengal after the election results were announced.

The RSS in the last three years has increased its presence in the state significantly with more than 280 Shakas in south Bengal and more than 700 shakas in north Bengal.