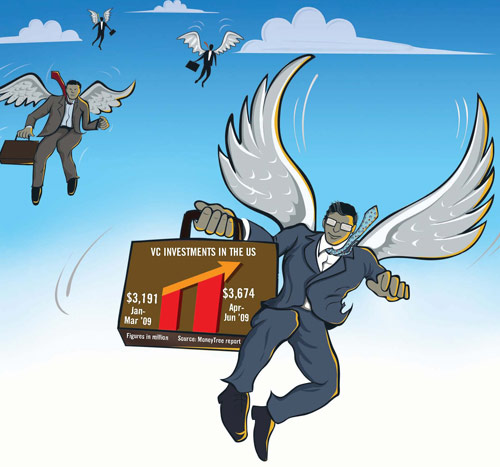 Current financial conditions do not matter much for entrepreneurs. They are focused on the future, and often several years into it. However, they are interested in one aspect of the present: the mood of venture capitalists (VCs). When VCs do not have confidence in the entrepreneurial environment, they do not invest in new companies. The number of initial public offerings (IPOs) goes down, and entrepreneurial activity generally slows due to insufficient liquidity in the market. Start-ups shut shop.

The VC confidence index in Silicon Valley had been falling steadily for five consecutive quarters till the end of last year, but rose again in the first quarter of this year. It continued to increase in the second quarter, and is now back to where it was at the beginning of last year. "Most VCs here now feel that the worst is behind us, and it is time to plan for recovery," says Mark Cannice, associate professor of entrepreneurship at the University of San Francisco, who has been tracking the index since 2004.

Cannice's research has shown a link between lack of confidence among VCs and a drought in the IPO market. So, other aspects of the entrepreneurial environment have shown improvement too. The US VC investments increased this quarter, after a steep fall in the first quarter. The number of IPOs rose for the first time in the second quarter, after falling consecutively for five quarters. These are not big changes. No one expects a recovery in quick time. "VCs are still cautious about the capital markets and broader economy," says Cannice.

The reports define and look at things a bit differently, but there are interesting common themes and details within the big picture. Funding levels for life sciences and healthcare have risen substantially. Those on healthcare have returned to almost peak levels, according to Dow Jones. MoneyTree says that life sciences investments represented the highest percentage (47 per cent) of the total in a quarter since the inception of the reports in 1995 — $1.5 billion went to 160 life sciences deals last quarter. Interestingly, Dow Jones highlights that IT investments have fallen to low levels. Says Shawn Jaswal, research analyst at Dow Jones: "For the first time ever, investments on IT are lower than those on healthcare." Dow Jones has been tracking the investments since the tech boom early this decade.

Life sciences also saw the biggest single investment of the quarter. Colorado-based Clovis Oncology raised $145 million in seed financing in May from seven investors. Even after excluding this deal, biotech is still the largest sector, according to MoneyTree. The second-largest deal was the $75 million in series E funding for Workday, a software-as-a-service (SaaS) company based at Pleasanton, near Silicon Valley. However, for both MoneyTree and Dow Jones analysts, these trends do not mean anything. "It is too early to say anything," says Jaswal. Some of the big changes are not yet visible in the data.

The VC industry is probably at crossroads, particularly in the US, with several trends trying to push it in different ways. On the one hand, it has several problems to reckon with: lack of sufficient exit opportunities, inadequate investment in VC funds and looming financial regulation in the US. On the other hand, VCs are now optimistic of the recession slowing down and entrepreneurship thriving. A few industry observers are now talking about a new normal, a level of investment somewhere in between the peaks and lows of recent years.

Consider the financial regulation first. A month ago, US President Barack Obama announced a proposal to overhaul the country's financial sector. The aim is to prevent massive risk-taking by financial firms that could lead to collapse of the financial system. Obama's proposals were not inspired by the VC industry — he was more worried about systemic risk and not so much about risk capital. His proposals rattled the VC industry. VC companies that have assets over a threshold would now need to register with the regulator, a measure that would hurt small venture firms particularly. Says Graham Burnette, general partner at SBV Venture Partners, a Silicon Valley VC firm: "Regulation introduces transaction costs that need additional resources." VCs believe that such regulation is unnecessary, and fear that it is the beginning of more stringent controls on the industry.

VC firms have also been affected by insufficient fund-raising. A survey by the NVCA showed that 25 VC funds raised $1.7 billion in the second quarter of 2009, the lowest level since 2003. This is not surprising considering the economic conditions, particularly because many large VC firms have enough money and would prefer to wait till the conditions improve to raise more. There are small VC firms who are struggling to raise money, and they are expected to close down soon. The VC industry is thus expected to reduce in size over the next five years.

The US IPO market has improved slightly in the last quarter after reaching a low point in the first quarter of 2009, when there were only two IPOs that raised $722 million. The second quarter saw 12 IPOs that raised $1.6 billion, according to the IPO Watch of PwC. But this is no consolation for VCs because the volume is still low, and the merger and acquisition activity is also low. Yet, the IPO market started picking up for the first time since 2007, and observers hope it will return to ‘normal' within a year.

Meanwhile, there are a few noticeable ways that VCs are spending their money. They are more interested in making sure their portfolio companies stay in business. They are certainly not creating new markets; they are more interested in making enterprises more efficient. In IT they are going virtual, and investing in technologies that reduce hardware.