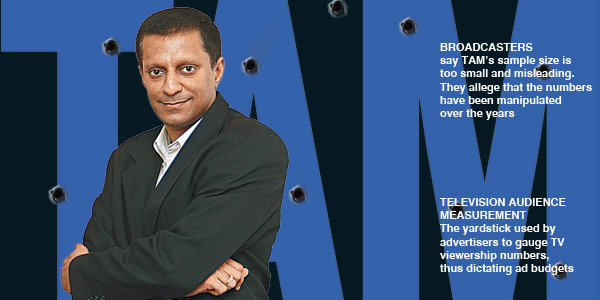 08 November, 2014
Print this article Font size -16+
The broadcast industry is on the boil. Several leading broadcasters — Multi Screen Media (owner of the Sony channels), Times Global Broadcasting (owners of the Times Group channels), NDTV and now Bloomberg TV — have pulled out of the audience measurement and ratings agency, TAM Media Research. Other big broadcasting groups, including Star India and Zee Entertainment Enterprises, said they won’t be renewing their contracts.

The Union information and broadcasting (I&B) ministry, which has for long lobbied for a industry-run, independent ratings agency, has joined issue and declared TAM Media to be persona non grata. “We are for shutting down TAM,” I&B minister Manish Tewari told BW. “If it wasn’t an election year, things would have moved faster,” he said. On the other hand, L.V. Krishnan, CEO of TAM and a veteran of many controversies, is confident that the brouhaha will blow over, and his ratings will rule the roost.

Things have just about been pulled back from the brink for the moment. With Rs 14,000 crore in TV advertising riding on the back of these weekly ratings, organisations representing ad agencies and advertisers — the Advertising Agencies Association of India (AAAI) and the Indian Society of Advertisers — have been urging caution. Discussions between the three stakeholders — broadcasters, ad agencies and advertisers — have resulted in a temporary truce that will allow TAM to survive for now. “TAM will function under the guidance of BARC (Broadcast Audience Research Council) till an alternative is in place,” says Shashi Sinha, chairman of BARC’s technical committee and head of ad agency Lodestar Universal.

BARC — a tripartite body representing the stakeholders — was set up two and a half years ago to work out an industry alternative to TAM. Zee Group MD and chairman of BARC Puneet Goenka says work is on full steam and a new measurement system will be in place by April.

A Hot Debate
The attack on TAM is on three fronts. Broadcasters allege that the sample size for its audience research is too small and does not truly reflect what TV viewers are watching. The Amit Mitra Committee set up by the Federation of Indian Chambers of Commerce and Industry around two years ago had suggested 30,000 ‘people meters’ as the optimum sample size. TAM has just 9,500. Star TV chief Uday Shankar claims TAM only covers a third of the market and, as a result, there is a skew — advertisers are paying far less than the reach provided by some channels. Krishnan admits TAM does not monitor rural markets yet, and that in the east and south only towns with populations of 100,000-plus are covered.

Broadcasters are also upset with the wild swings in the ratings and the continuing drop in TV viewership ratings (TVR). The Indian Broadcasting Foundation’s (IBF) general secretary, Shailesh Shah, points out that though there has been a fragmentation of TV audiences due to the increasing number of channels, those watching have risen sharply from 650 million to 800 million in two years. Smaller channels are the most peeved. Bloomberg TV has, for instance, said in its termination notice to TAM that it “has no measurement of behaviour in offices, a key constituency of business news channels”. Some networks such as NDTV have even alleged that TAM’s numbers are open to manipulation. In an August 2012 filing in the New York Supreme Court, NDTV included transcripts of conversations with TAM employees willing to switch numbers for a consideration. State-owned broadcaster Doordarshan (DD) too has charged TAM with “misuse of monopoly” before the Competition Commission of India (CCI), and a preliminary inquiry has been initiated.

TAM says it is being blamed for problems faced by broadcasters that have come with recession and competition. The Telecom Regulatory Authority of India’s insistence on limiting ad time per hour to 12 minutes has forced broadcasters to increase rates and that has hit revenues. On the other hand, digitisation and the variety of niche channels has taken audiences away from the traditional leaders. “With channels being bunched on the remote on the basis of genres, loyalty has increased. We merely reflect the audience numbers on the ground; we cannot be blamed for someone’s share falling,” says Krishnan.

He insists the sample size is scientific and has been constantly on the rise. “We had 750 people meters in seven cities in 2000. Today, we are in 225 cities with 9,500 meters. We’ve got urban India covered; in the north and west, agglomerations as small as 10,000 people are included.” Krishnan also takes exception to the Centre threatening TAM, saying, “Why should the government come into this? TAM isn’t a consumer service impacting millions; it is a B2B service.” He has the support of advertisers and ad agencies. “The move by broadcasters to discontinue ratings is ill-advised… It will lead to over-paying and under-paying for ad time, both of which will lead to the collapse of TV as an advertising medium,” says Arvind Sharma, AAAI president and chairman of ad agency Leo Burnett.

Again, notwithstanding DD’s complaint against TAM before CCI, Prasar Bharati CEO Jawhar Sircar has said DD won’t pull out of TAM. In recent weeks, DD Samachar and DD News’s prime time bulletins’ ratings have soared, but that may be a coincidence.

A Troubled History
TAM, or Television Audience Measurement, was formed as a joint venture in 1998 for the Indian market by Nielsen research services, the WPP-owned Kantar Media Research and Cavendish Square Holdings. A rival TVR agency, INTAM, owned by ORG-Marg, merged with TAM in 2001, giving the latter a monopoly.

Its troubles began in 2001 when Zee TV, smarting at losing leadership position to Star Plus, carried out a sting operation to prove that TAM’s figures were open to manipulation. A Zee subsidiary released a list of hundreds of ‘people meter homes’ in Mumbai — supposedly a closely guarded secret. Worse, the sting showed most of these ‘meter homes’ were in single-room tenements or slums, easy targets for manipulation. TAM admitted that its sample homes had been tampered with, but insisted that its audience measurement system was scientific.

Rumblings among those who lost ad revenue in the TVR game continued, and anger exploded with NDTV filing a suit with the New York state Supreme Court on 26 July last year, claiming $1.4 billion in damages against TAM’s parents — Nielsen and London-based WPP. NDTV alleged that it had lost revenue of close to $810 million over eight years on account of “false, fabricated and manipulated data released to the public”. In reply, both Nielsen and WPP filed petitions before the New York court seeking dismissal of the case. They argued that the broadcaster had come to the wrong forum since the cause of action had arisen in India and not the US. Nielsen also pointed out that NDTV had voluntarily enrolled as a subscriber and used the data to raise advertising for eight years. This March, the New York court dismissed the NDTV filing and suggested that an Indian court would be the right forum. NDTV has kept its claims alive in the US by filing an appeal on 15 May before a superior court.

TAM Media has had to contend with a challenger too. Audience Measurement and Analytics (aMap), launched in 2004, promised advertisers and broadcasters daily ratings based on overnight surveys. It claimed a sample base of 7,200 people meters at its peak, but could not sustain what is a fairly expensive business. aMap suspended operations in August 2011.

The Alternative
The challenge thrown by BARC promises to be more serious. In 2001, when TAM and INTAM merged, the measurement agency was expected to be an industry-monitored body funded by the different stakeholders. This never happened and the Nielsen-Kantar JV invested and developed TAM as an independent vendor of TVRs.

BARC’s mission is to reverse the clock and re-establish the industry’s hegemony over audience measurement. “There are a variety of channels big and small. TAM has treated them with the same matrix. There is a diversity that has to be captured. BARC will be supervising the methodology and bidding,” says Goenka.

Giving details, Sinha says the new system is expected to kick in sometime in April 2014. As compared with TAM’s 9,500 meters, BARC will ensure coverage of the entire urban and rural market with 21,000 meters. This will be ramped up to 30,000 in two-three years. The new system is also expected to capture the data of multi-TV homes, as well as TV content consumed on non-TV screens like laptops, tablets and smartphones.

Funding Mismatch
TAM’s response to charges of faulty methodology and small sample size has been that the industry stakeholders are not willing to put their money where their mouth is. TAM, though set up by corporate research firms, was initially envisaged as part of a joint industry process funded and supported by broadcasters and the ad fraternity. This never happened and TAM drew on its parents and subscription for investment funds. “Good technology and large sample sizes require funds. Let industry open more funds, we will deliver their dreams,” says Krishnan.

While TAM has ramped up, it has been with its own money. Though the agency does not reveal its financials, industry sources estimate it has been ploughing in Rs 70-80 crore a year over the past 13 years — an investment of close to Rs 1,000 crore. These sources estimate the agency today raises around Rs 100 crore through subscription.

But, is BARC ready for the big financial commitment? Tewari admitted that one of the main reasons for the delay in the new measurement system was the high investment involved, estimated at about Rs 600 crore. “It is not very clear who and how this will be raised?” he says. BARC spokespersons, however, say this is a non-issue. “All stakeholders have agreed to put in the money as the need arises on the 60:20:20 formula (broadcasters 60 per cent, ad agencies 20 per cent and advertisers 20 per cent). Besides, we don’t know where this Rs 600-crore figure has come from. It is a gross overestimation based on the old costs of panels and meters,” says Sinha.

The business model of the new measurement system has been misunderstood, says Goenka, adding, “We are working on the UK model. The main costs are in the metering. BARC is merely putting the methodology and the monitoring system in place. It is the vendors who will execute the metering system. They will make the investment and recover their money from subscription.”

Sam Balsara, chairman and MD of ad agency Madison World, says TAM’s contribution cannot be negated. He points out that the TV industry has been able to grab a lion’s share of ad revenue — almost 45 per cent of the Rs 30,000 crore invested by advertisers each year — because of a well-developed measurement system. “Take a look at radio and out of home; they don’t have a robust measurement system, hence they account for just 5 per cent of the media spends,” he says.

How is the future going to play out? BARC is determined to launch its industry-monitored measurement system soon. However, people like Sinha and Goenka say they would welcome TAM as a bidder and vendor for the new system. TAM too confirms it will bid for some segments of the BARC project. However, there is also the possibility of a dual currency regime, with both TAM and BARC slugging it out for recognition. This match is far from over.