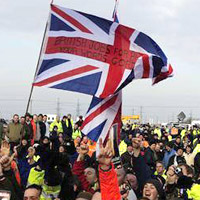 08 November, 2014
Print this article Font size -16+
Britain's economy shrank more than expected at the end of 2012 with a North Sea oil production slump, lower factory output and a hangover from London's Olympics pushing it perilously close to a "triple-dip" recession.

The country's gross domestic product fell 0.3 per cent in the fourth quarter, the Office for National Statistics said on 25 January, sharper than a 0.1 per cent decline forecast by analysts.

The news is a blow for Britain's Conservative-led government, which a day earlier defended its austerity programme against criticism from the International Monetary Fund. It needs solid growth to meet its budget targets, keep a triple-A debt rating and bolster its chances of winning a 2015 election.

Sterling fell to its lowest in 13-1/2 months against the euro and hit a five-month low against the dollar in response to the data. The euro was also buoyed by a stronger-than-expected German Ifo sentiment survey.

"There are no positive takeaways from today's first (GDP)estimate," said Lee Hopley, chief economist for the EEF manufacturers' association. "Even assuming some unwinding of activity from the Olympics boost in the previous quarter, this still leaves no real signs of underlying growth in the economy."

Britain's economy is now 3.3 per cent smaller than its peak in Q1 2008, having recovered only about half the output lost during the financial crisis - a worse performance than most other major economies.

The country slipped back into recession in the last three months of 2011, and only emerged from it in the third quarter of 2012, after a boost from the London Olympics.

After a bout of snowy weather in January - which is likely to have hit spending and output - the risk is that the economy will continue to shrink in the first three months of this year, technically pushing it into a rare "triple dip" recession.

Politically Incendiary
In economic terms, the picture remains one of stagnation over the past year. But politically, the latest dip in national output is more incendiary.

"Stagnation is going to be the theme for the next couple of quarters or so. This obviously brings Osborne's strategy into sharp relief and also the (Bank of England) strategy of maintaining or not sanctioning further monetary policy action," said Rob Wood at Berenberg Bank. "The Bank of England were forecasting a return to some growth in Q1 and that is likely to be disappointed."

Finance minister George Osborne stuck fast to his austerity plan on Thursday, rejecting suggestions from the International Monetary Fund's chief economist that he should consider slowing his deficit reduction plan.

Prime Minister David Cameron this week staked his political future on offering a referendum on Britain's place in the European Union. But it is Osborne's gamble that austerity will deliver strong growth before a 2015 election that will be crucial for his Conservative party's chance of winning.

After the figures were released, the Osborne conceded that Britain was still in a "very difficult economic situation".

"We face problems at home with the debts built up over many years and problems abroad, with the euro zone - where we export many of our products - deep in recession," he added.

Osborne's coalition partner, Liberal Democrat leader Nick Clegg, has said the government of which he is part had cut investment spending too rapidly.

"David Cameron and George Osborne have been asleep at the wheel. They've spent the last six months obsessing about a referendum in five years time, not focusing on the problems in our economy today," Balls said.

Britain's chief central banker Mervyn King expects no more than a "gentle recovery" this year, while this week the IMF cut its 2013 forecast for British economic growth to 1.0 percent from 1.1 percent predicted in October.

However, economists and business groups warn that even such lackluster growth could be derailed by a hit to firms' and consumers' confidence from talk of a triple-dip recession.

The biggest driver for the fourth-quarter fall in GDP was a 10.2 percent drop in mining and quarrying output, the biggest since records began in 1997, driven by disruption from extended maintenance affecting North Sea oil and gas fields.

This knocked 0.18 percent off GDP, while slightly smaller amounts of damage were done by falls in factory output and in the 'government and other services' category, where the Olympics had boosted sports and recreation services in the third quarter.

Friday's figures showed output in the service sector -- which makes up more than three quarters of GDP -- was flat in the fourth quarter. Industrial output was 1.8 percent lower.