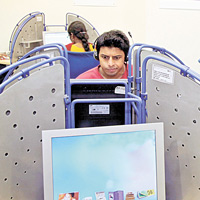 08 November, 2014
Print this article Font size -16+
By 2015, Internet-based services and gadgets will contribute around $100 billion to India’s gross domestic product (GDP) from $30-odd billion now, forecast a report by McKinsey. ‘Online and upcoming: The Internet’s impact on India’, a new report by the global consultancy, said the Web accounted for 1.6 per cent of the GDP in real purchasing power parity terms in 2011. McKinsey said the coming three years would see India add more Internet users than any other country; average penetration in the country was likely to rise from 10 per cent to 28 per cent in the period. That said, the growth is still much lower than the projected global average penetration of 43 per cent. By 2015, India will be second only to China in terms of the number of people using the Internet, with about 330 million. For now, the country has about 120 million Web users.
Black Mark
India lost some $1.6 billion (about Rs 9,000 crore) in unlawful outflow of funds in 2010, says a study by advocacy firm Global Financial Integrity. In the running decade, the report says, India lost $123 billion in black money. The study has ranked India as the decade’s eighth largest victim of illicit capital flight, behind China, Mexico, Malaysia, Saudi Arabia, Russia, the Philippines and Nigeria.
Checking Out
DLF will sell its full stake in luxury property Aman Resorts to the hotel chain’s founder Adrian Zecha for $300 million (about Rs 1,600 crore). The sale is part of the debt-hit developer’s move to exit non-core assets and cut debt. In the September quarter, DLF’s debt stood at Rs 23,200 crore.

DLF will, however, retain the 6-acre property belonging to Aman in Delhi. Aman runs 25 small luxury hotels in Bhutan, Cambodia, Laos, Morocco, among others. Since 2010, DLF was looking for a buyer for the chain, which it bought for $400 million in 2007.
Risky Transfer
Former chief economic advisor to the finance ministry Kaushik Basu says the UPA’s flagship direct cash transfer scheme carries the risk of inflation. Basu, currently chief economist at the World Bank, says the scheme should be indexed to adjust for inflation.
Pumping It Up
Mukesh Ambani-promoted Reliance Industries is expected to invest $10 billion on the 4G network of its arm Infotel Broadband, according to one of its vendors Spirit DSP. Infotel is the only firm in India to hold 20 Mhz of airwaves which it can use for offering 4G services across states.
Penalty Kick
Swiss banking major UBS has admitted fraud in the Libor-rigging case and will pay a fine of $1.5 billion. UBS admitted to bribery in connection with efforts to manipulate benchmark interest rates and agreed to pay the fine — one of the largest ever to be slapped on a bank — to the US, the UK and Swiss regulators.
Snapping At Bankers
U.K. Sinha, chief of market regulator Sebi, did not mince words when it came to expressing his displeasure at the way investment bankers conducted their business in India. He compared the industry with traditional matchmakers. The matchmaker “goes out and tries to sell all good qualities about a bridegroom. Whether the bride is ready or not ready, it doesn’t matter to the matchmaker,” said Sinha at a conference.
Fuelling Demand
Global coal demand will rise 2.6 per cent a year over the next six years and challenge oil as the top energy source, says the International Energy Agency (IEA). Coal consumption will rise to 4.32 billion tonnes of oil equivalent by 2017, against 4.4 billion for oil, notes IEA’s first Medium-Term Coal Market Report. Coal demand in China and India will continue to drive world usage, accounting for almost two-thirds of global coal demand by 2030.
Going Places
India has become the world’s biggest exporter of rice, beating Thailand. It exported about 9 million tonnes of rice in 2012, says the Food and Agriculture Organisation. In the crop marketing season that ended in July, India saw a rice output of 104 million tonnes.