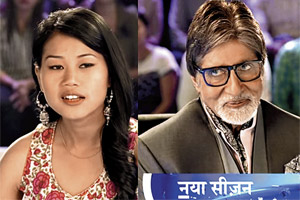 08 November, 2014
Print this article Font size -16+
North East is suddenly the flavour of the season. Both the rail and Union budget made outlays to the neglected corner of India, promising better connectivity and even a 24/7 channel. But it’s not just the government of India. Even ad filmmakers are looking north-eastwards.  If Nestle’s Share the Goodness campaign featured a young child from North East being adopted, then Leo Burnett’s new campaign for Sony’s Kaun Banega Crorepati takes the message of inclusion even further. It shows Amitabh Bachchan quizzing a contestant as to where Kohima is. The contestant opts for an audience poll and the host tells her that 100 per cent people responded with India. “Everybody knows that Kohima is in India,” Amitabh tells her. She retorts, “Jaante hain par maante nahin” (they know it, but don’t acknow ledge it).

It’s an evocative touching ad that breaks the clutter, and not surprisingly, has gone viral all over social media and email and chat groups.  But while the central messaging is powerful, the ad’s creators could have been a bit more sensitive in their visualisation going by some of the reactions pouring in.

Many from the North East have quibbled about how the ad unintentionally reinforces the old clichés by showing cooks and security guards hailing from North East, when it could have depicted them in other service roles.