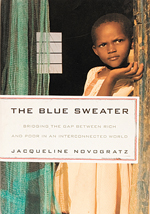 Why The Blue Sweater? Jacqueline Novogratz, the bubbly and cheerful writer of this serious book on "bridging the gap between the rich and the poor in an interconnected world" answers the question right away, in her opening lines. "It all started with the blue sweater, the one my uncle Ed gave me," begins Novogratz.

The writer recounts her journey as a wide-eyed school girl who loved the garment as she grew up in a modest Virginia neighbourhood until she turned into an awkward freshman trying to live down her bust size and, provoked by a "mean kid" and his insulting tease, gets rid of the sweater she hated by then, ceremoniously disposing it off as goodwill with her mother's help.

Eleven years later, she spots a young boy in Rwanda wearing that very sweater, with her name still on the tag inside. It was ample evidence, Novogratz feels, that we are all inter-connected; our action and inaction touch people every day across the globe, people we may never know or meet. It is to her credit that she turns this idealistic notion in a polarised world into something tangible and believable over the course of this enjoyable memoir, both by setting an example, and with the power of persuasion.

The book is testimony to Novogratz's good work and intentions. Even better, the author manages it with self-effacing candour, especially in the early chapters, where she says she fell flat on her face as she strode into Africa with dreams of changing the world.

In time, the former investment banker learnt to trust native wisdom, and combine it with the cutting-edge pragmatism her years in Wall Street taught her. Novogratz is the founder of the non-profit Acumen Fund, which makes careful investments in entrepreneurs who are willing to address issues arising from poverty. A proponent of patient capital, which "one built on the best lessons and precepts of philanthropy, but also utilising business approaches and concepts", the writer is sure of her place in the world. "Indeed, the idealism of my 20s has returned in my 40s," she says.

It is this transparency and decency that permeate every page of this book, which relies on optimism and hope to solve some of the world's worst problems. Novogratz's unadulterated affection for her subjects is contagious. There is Prudence, who dreams of the day when women will receive the same respect that men do, and says, with a twinkle in her eye, that she can see that day coming, and the boy in Zaire who wants Novogratz to take him home with her because she is a rich woman.

Her writing sparkles with her insights and her willingness to learn. Over the course of this book, it becomes a compelling anthem, more convincing than statistics and tables, more interesting than strategies and case studies. Whether patient capital finds more takers or not, and one sincerely hopes it does, there is no doubt that Novogratz is making the world a better place. Her story — which, she says, is many stories thanks to the many people who have touched her life — deserves to be read.