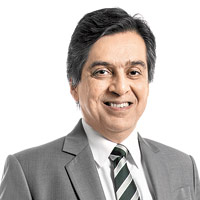 08 November, 2014
Print this article Font size -16+
It is that time of the year when I look back at the months gone by and analyse events which may have leveraged the prospects of the Indian economy, and the progress seems manifold in almost all sectors. Real estate and infrastructure, too, is an area that has witnessed unprecedented growth in the past two decades. From roads to highways and bridges to state-of-the-art buildings, housing systems, office complexes, malls and more — the construction scenario has been spectacular.

However, with growth comes the slack, and with the economy facing a slump in the past few years, no sector has been left unscathed. Real estate has also been facing the music, what with a slowdown that is refusing to go away. Investors and builders have been awaiting a turnaround — but to no avail.

Monetary tightening resulting from RBI’s measures to control inflation was the major macro influence on the real estate business in India through most of the year. High interest rates, spiralling vacancy levels and lower margins arising from inflationary pressures, too, led to a slowdown of construction activity, leading to a drop in new launches, and also delayed project delivery by several months. Developers with exposure to residential projects are particularly worried, with slowing sales leading to a situation of oversupply in many parts of the country. Unsold inventory levels within the Mumbai Metropolitan Region stood at 45 per cent, followed by NCR (national capital region) which hovered around the 25-30 per cent mark.

On the commercial front, the sluggishness coupled with dull sentiments was equally evident in the shopping centre business, with as many as 13 mall projects being deferred in the top eight cities of the country during the first six months of 2013, as developers were either cautious or facing a cash crunch. The top eight cities witnessed a total mall supply of nearly 3 million sq. ft during the first half of 2013 with over 60 per cent of the total expected supply deferred.

The government’s decision to allow 51 per cent FDI in multi-brand retail couldn’t have come at a better time and should benefit the retail sector by making way for more shopping malls in each city. The office market though, has managed to hold its ground, and is being driven by the burgeoning IT and BPO industries, which are bringing large amounts of cash. Also, with the Western economies now showing some green shoots of recovery, it would not be unfair to consider them  catalysts for leveraging the momentum, even further. However, from an investment perspective, I expect the BFSI (banking, financial services and insurance) sector to drive the majority of office space absorption on the back of issuance of new banking licences in early 2014.

At a time when the real estate sector was reeling under a liquidity crunch and poor sales, the Securities and Exchange Board of India (Sebi) revived the process of introducing real estate investment trusts (Reits) in the country. In view of the crucial role that Reits could play as investment vehicles, the Sebi brought out draft Reits regulations in December 2007 to encourage and facilitate their healthy growth in India. However, these regulations couldn’t take shape due to a number of factors, including the global economic slowdown, which also impacted real estate markets. In a welcome move, Sebi once again brought out draft Reits regulations in 2013, which were made public on 10 October for inviting stakeholders’ views.

While there may be some distance to cover before India develops retail Reits as they exist in the US, the measure is expected to boost transparency and corporate governance in the real estate industry as a whole.

The underlying reason for all these moves is that the Indian real estate story continues to be tremendously attractive. While there is a sort of saturation in tier-I cities, the good news is that tier-II cities have started growing with the IT/ITeS and industrial sectors investing in such places. Thus, Indian real estate is poised for a boom, and will take the economy along with it.

The notion that Indian real estate is expensive is based more on the cost of undeveloped land, which is becoming a scarce commodity, than finished residential or office space, which is still available at reasonable prices in most places.

The momentum remains positive. If we can get the investment story right, lower the fiscal deficit, and have more progressive monetary policies drafted by the Reserve Bank, there’s nothing that can stop us from coming back onto the growth track by the second half
of 2014.

The author is chairman and managing director, Knight Frank India. The views expressed here are his own