Bribery Is No More A Dirty Word, Says Survey 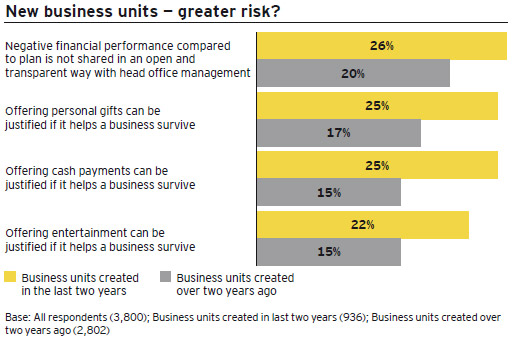 08 June, 2015
Print this article Font size -16+
Endemic corruption in India is no more a secret. Certainly, corruption has become the most talked about issue in India. It was a major election issue in the 2014 Lok Sabha polls as well. Cutting across the party lines politicians claimed that they have the fervor to wipe out the menace. However, the situation is still bleak.
In the present scenario, when new businesses are sprouting at a rapid pace, it is also a fact that intense competition and a volatile scenario and in order to grow and survive companies have to resort to corruption that includes appeasement and bribery.
According to EY’s Europe, Middle East, India and Africa (EMEIA) Survey on Fraud and Corruption --The Easy Option forGrowth report, the issues of fraud, bribery and corruption and the ways to tackle them is still impeding India to realise its true potential to progress. The India findings shows  that 35 per cent  of the respondents do agree with the fact that conformity to their organisation’s anti-bribery and anti-corruption policies would eventually prove to be a hurdle to their competitiveness in the market.

Around 57 per cent stated that increased regulation in their sector is augmenting challenges for the growth or success of their business.
However, nearly 66 per cent have accepted that indulging into some form of bribery both in cash and kind is deemed acceptable.
Arpinder Singh, Partner and National Leader, Fraud Investigation & Dispute Services, EY said: “Irregular practices such as booking revenue from rebates with suppliers early still continue to be rampant. However, the survey does indicate that there is enhanced awareness about ethical business practices and that acceptance seems to be setting in, though it may take time.”
The findings that have surfaced and the concerns primarily for India are:
Businesses are operating in an exceptionally challenging environment
But management is under increased pressure to find new ways to grow their business
Fast track techniques for rapid growth may lead to unnecessary risk-taking behaviour
But effective compliance is a requirement for sustained success
Good practices yet to catch up
The survey was carried out between December 2014 and January 2015, and the researchers conducted 3,800 interviews with employees in 38 countries, covering Europe, Middle East, India and Africa.
Tags assigned to this article:
india news 4 bribery survey india inc ey