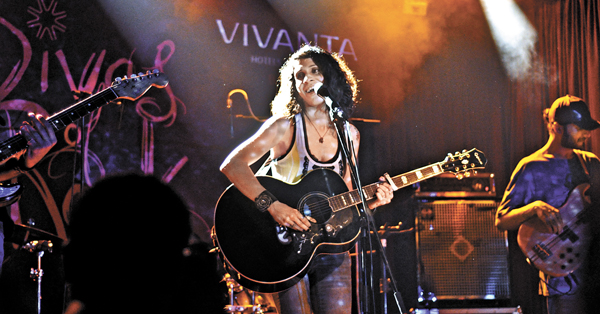 08 November, 2014
Print this article Font size -16+
Why has a century-old stately 5-star hotel group opened its doors to funky rock divas? Why has a PC maker tied up with a rap artiste to co-create a laptop series? And, why is a beverages giant making melodies and finding singing talent?

Brands have always used anthems and jingles to connect with their consumers. But suddenly, they are hitting the octave and taking their engagement levels with music to new highs. Companies across sectors — FMCG, telecom, hospitality, auto, technology — are investing in music properties.

Take the way Vivanta by Taj has seeded bands such as the Divas of Rock and Urban Folk. Or look at how German auto maker Audi has created a music video This is Your Time to launch its Q3 model in India. Or take Nokia’s Music Theatre, a talent scouting platform for the grassroots. The big daddy of them all is Coca-Cola’s musical splash: Coke Studio.
No longer is music the exclusive preserve of record labels, entertainment companies or Bollywood. Powered by social media, consumer brands are breaking the sound barrier as they create new musical platforms. Swedish marketing agency Heartbeats International reports that brands that have been quick to get into the social music revolution have scored. It cites battery brand Duracell’s investment in a Scandinavian music sharing site Ramp Music.

There are many such examples: Hewlett- Packard’s medley with rapper Dr Dre to create its Beats Audio Laptop series. And its Musical Meetups featuring the band Pentagram. Mobile phone brand Nokia, which has 4 million tracks in its digital library, has been quick to leverage its brand ambassador Priyanka Chopra’s singing debut — grabbing exclusive rights for her In My City single for the first 14 days after its release.

Leading all the musical action is quite aptly the world’s biggest brand: Coca-Cola. If its Coke Studio struck the right chord, then its Move to the Beat campaign rocked the social media world during the London Olympics.

Music Therapy Works
There is hard logic behind these musical moves of brands. Says Wasim Basir, director of integrated marketing communications, Coca-Cola India, “One of the key things we realised was that consumers don’t wake up every day to talk about brands. That’s not their mission. But consumers talk about friends, family, music...”

Coke realised that if it wanted to make a deeper connection with its cola-swigging audience, then it had to become a part of their interest groups. “We decided to enter the discussion and put across Coca-Cola’s point of view towards music. As a brand we promise to bring people together. Our music is also about the coming together of two things: two genres or two languages,” says Basir, pointing to Clinton Cerejo’s western beats synergising with the rustic Rajasthani notes of Sawan Khan Manganiyar.

For Taj Hotels, the investment in music was part of a larger rebranding exercise. When Brand Vivanta was born, the target audience was a bon vivant personality. “The working woman of the 21st century who actively seeks loud spaces, the everyday office-goer who becomes a wild child in the evenings, who appreciates the fine things in life,” explains Deepa Misra Harris, senior vice-president of sales and marketing, Taj Hotels Resorts and Palaces.
break-page-break
The brand values could not just be transmitted through a logo identity, but had to manifest itself through an idiom of style and spirit, both in terms of experience and the element of design, says Harris. And this is where the music experience came in.

“Rock and roll has predominantly been a male bastion. We thought we could make a small attempt at playing talent spotters and talk to the 21st century princesses and give them a platform,” says Harris, describing the Divas of Rock endeavour for which it forged partnerships with Rolling Stones magazine, Blue Frog and Sony Music. After this, Vivanta extended its musical arms to Urban Folk — a fusion of folksy music with urban bards. And now, it is test marketing another initiative: Barn Fest. This is a music festival in the open sky, grass-underfoot Woodstock mode in Goa, created with a trippy young audience in mind.
And that is at the core of the branded music initiatives spreading across the world: appealing to the youth. As brand consultant Giraj Sharma  points out, music is a global connector, it spreads like a viral outbreak. Look at how Kolaveri Di streaked through digitally to every part of the world. And, the returns that you get from small investments in music are phenomenal. Entire communities are created around music; sharing, talking about it.

Vibrant And Viral
Social media and new technology have added momentum to the music movement. An explosion of devices such as MP3 players, mobile phones, online music platforms  and sharing sites have led to higher music consumption globally. Apple, with its iPod and iTunes, has played a starring role. The Heartbeat International report says, on average, consumers now listen to music over five different platforms.
HP’s involvement with music was to latch on to this trend. As Ranjivjit Singh, CMO, HP India, explains, the company wanted to be at the forefront of fusing music and technology. This was why it created Beats Audio, a sound-focused technology exclusive to HP PCs, in partnership with Dr Dre. And to promote Beats Audio, it began connecting with its consumers offline, online and through hybrid channels using music  as a medium. In India, for instance, HP has  done offline Music Meetups, contests on Miss Malini.com and put together a crowd-sourced song project on Facebook.

For marketers, music is increasingly proving to be a better bet than sports and movies as it speaks a universal language. Snehal Shinde, co-founder and CEO of music streaming site Dhingana, says that for most people, music is an everyday activity — often starting from the time they wake up. He says mobile phones will further drive music consumption. Out of the 11 million active visitors on Dhingana, close to 7 million listen to music on mobile devices.  Brands such as Reliance, Emirates, Microsoft and Samsung are using Dhingana’s platform to connect to music listeners.

Viral Oza, director marketing, Nokia, says there has been a steep rise in the volume of music downloads from the Nokia Music Store, reaching over one million per day. A new investment by the brand is Nokia Mix Radio, an online music radio exclusive to Nokia devices where it’s possible to build custom playlists.

Breaking The Sonic Barrier
Internal impact measurements by the brands show they are hitting the right notes. For Vivanta, since it began doing the music gigs, there has been 19 per cent growth in brand salience scores. “We cannot directly attribute it to these events of course,  but the Gallup measurement shows that we are on the right track,” says Harris.

The other indices are the social media buzz. Coke’s Basir points to the number of views — 5 million — that Coke Studio India has garnered on YouTube. “There is now always a race between consumers and us as to who uploads our Coke Studio music creation first,” he says.
Vivanta endorses this — within a day of adding Divas of Rock to its Facebook page, the brand attracted 2,400 new members.

Perhaps nothing spells out the magic of music more than Coca-Cola’s new marketing mission statement. It says the company will look beyond traditional advertising and focus on producing content that is “liquid and linked”, one that can flow through any medium. Music fits that groove perfectly.