Born To Be A Scorpion 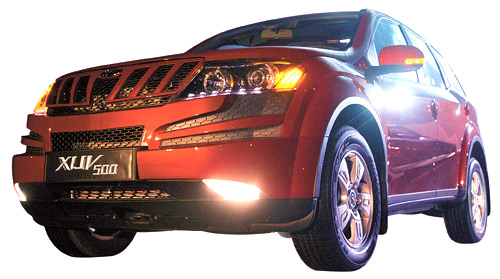 
"Segments are defined by price points and design," says Michael Boneham, president and managing director at Ford India. As the industry matures, one will see design-led segmentation, he says. "In India, price is still critical."

That is why even when competition intensified among the utility vehicles, carmakers focused on features and functionality, keeping the prices around Rs 20 lakh (see Battle of the Biggies). The rules have changed with the XUV500 driving in at Rs 12-14 lakh with a bunch of features: a vehicle that takes your voice's command, informs about the tyre pressure, tells how many kilometres you could go before a refill, and has GPS and other gizmos. XUV500 boasts of an impressive output of 140bhp and a torque of 330 Nm from a 2.2 litre mHawk140 engine.

A Broader Race
Thus XUV500 is posing a big threat not only to the likes of Fortuner, Endeavor and Mitsubishi Outlander, but also to C-segment sedans in the same price range. Though Pawan Goenka, president-Automotive and Farm Equipment Sectors at Mahindra, had said at the launch that the XUV500 will help grow the overall SUV market, he also admitted to XUV's cannibalising effect on its flagship, Scorpio. "People from across age groups and income levels are enquiring about the XUV500. Customers come asking about Scorpio, but are booking XUV as it has similar pricing," says a sales consultant at a Delhi dealership, who does not wish to be identified.

Customers like Sanghvi are an indication of XUV500 eating into the share of others. But Sandeep Singh, deputy managing director (marketing) of Toyota Kirloskar India, which is at the receiving end, disagrees. "The SUV market in India is at 15 per cent currently and it should be close to 30 per cent, ideally. We have a lot of room to grow," he argues. Toyota's multi-utility Innova and luxury SUV Fortuner are in direct clash with the XUV500, while its C-segment sedan, Corolla Altis competes on price.

Boneham agrees that XUV500 is disrupting, given that there are many mid-size sedans and a few utility vehicles selling at that price point. But he says the vehicle needs to prove itself and that customer response will be the deciding factor.

The initial rush, however, boosts XUV500's ambitions. Between September and October — before and after the launch of XUV500 — Toyota sold 29 per cent less units of Fortuner (763 units in October compared to 1,078 the month before), Innova's sales dipped 28 per cent —3,411 units in October compared to 4,765. Similarly, Tata sold 1,612 units of Safari and Sumo Grande combined in October, down 30 per cent from the previous month. And buyers such as Sanghvi and Singh are testament that preferences do change on the basis of pricing.

Within 10 days of XUV500's launch, Mahindra was overwhelmed with bookings of 8,000 units; much more than its target of 2,000 units per month. Mahindra deferred bookings on 11 October as demand exceeded its four-month production capacity. It is trebling XUV500's capacity at its plant in Chakan, Maharashtra, and expects to re-open bookings next month.

High Value,  Low Pricing
Kumar Kandaswami, Auto Partner at Deloitte says that premium cars at lower prices are predatory and the pricing cannot be sustained. In fact, Goenka, at the launch of XUV500, had said the price is introductory and will remain so for the next 2-3 months.

"While pricing a car, the car maker evaluates its lifecycle revenue," says Kandaswami. "Companies do quote lower price at the initial stage to create a market, however, this low price is not sustainable. So, within 12-18 months (or 25 per cent of the lifecycle) they start increasing the price — once the product gathers momentum."

So, shall we rev up to shell out more for an XUV500 once the bookings resume? Even if the price is hiked by a lakh or two, it will remain cheaper than a Fortuner or an Endeavor, and will still compete with the sedans for