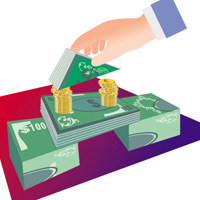 08 November, 2014
Print this article Font size -16+
The government will cut the tax on interest payments to foreigners on government and corporate debt to 5 per cent from up to 20 per cent for a two-year period, in a bid to draw further inflows to bridge its current account deficit and polish its reformist credentials.

The move meets a long-term demand of foreigners and makes Indian debt more attractive. Many other Asian countries such as Singapore do not tax such interest income.

Finance Minister P. Chidambaram also clarified that a tax residency certificate issued by a foreign government would be an accepted proof of residency for tax purposes.

The government, in its budget proposals, had created confusion with a proposal stating that a tax residency certificate "shall be necessary but not a sufficient condition" to take advantage of double taxation avoidance agreements.

Read Also: India Has All Qualities To Protect Foreign Investors
Read Also: Chidambaram To Woo Investors In US, Canada

The Finance Bill was passed by the lower house of the parliament amid an opposition boycott.

The 10-year benchmark government bond yield fell as much as 4 basis points to 7.73 percent while the Indian rupee breached 54 level to the dollar after the relaxation was announced.

The cut in the withholding tax follows recent easing in rules for investment in government and corporate bonds.

Chidambaram, who has been pushing reforms to draw inflows, recently met investors in roadshows in United States and Canada.

"This development coupled with the recent simplification of foreign investment limits in debt and easing of know-your-customer norms shows that the regulators are gradually liberalising the debt markets," said Rohit Arora, emerging market rate strategist at Barclays Capital.

"Our estimate of $6-8 billion capital inflow in government bonds in 2013/14 fiscal year is at a upside risk following these measures."

Foreigners have invested over $11 billion in Indian equities and nearly $3 billion in debt so far in 2013.

The latest measures by Chidambaram shows his attempt at pushing through executive reforms at a time when the opposition has stalled parliament over various charges against the government, including meddling in the affairs of the federal investigative body.