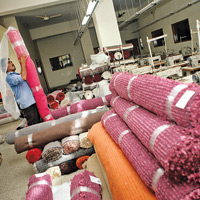 After a period of gloom, handicraft exports are picking up fast. Exports jumped to $46.87 million in September 2009 from $16.88 million in the same period last year. And exporters and the Export Promotion Council for Handicrafts (EPCH), a nodal agency under the ministry of textiles to promote handicrafts, are upbeat about the times ahead. "We have identified our weaknesses, and worked upon them," says Raj Kumar Malhotra, chairman of EPCH. "I am sure this would give dividends in times to come."

India's biggest competitor in handicraft exports is China. "It is hard to compete with the Chinese, as their products are made mechanically," says Malhotra. "We have taken up the matter with the textiles ministry to levy safeguard duties on Chinese goods, especially during the festival seasons."

EPCH is also changing its focus on unexplored areas such as Argentina, Columbia, Croatia, Hungary, Brazil, Portugal and Oman. "For the first time, we got orders from these countries. From now on, these would be our new destinations, other than the US, the UK, Germany, etc.," says Malhotra.