Book Review: Mariners Of The Desert 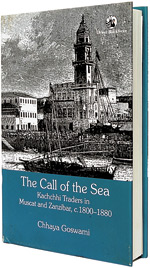 08 November, 2014
Print this article Font size -16+
Kachchh is the ungainly name given to Cutch by nominal nationalists after the British departed. Today, it is an undistinguished region stuck to Gujarat on the border of Pakistan. But until Sardar Patel persuaded maharajahs to part with their kingdoms in 1950, it was ruled by a dynasty of Jadeja Rajputs. It was founded by Lakho in 1147 after his uncle Jada, a chieftain in Sind, produced a son and no longer needed Lakho to succeed him.  Cutch gets hardly any rain; when it does rain, a bit of grass grows, on which a few cattle and goats feed. It also grows some cotton, from which Cutchis used to make coarse, colourful clothes; rural Cutchis continue till today to be picturesque. For the rest, Cutchis’ livelihood came from the sea. Chhaya Goswami recounts the story of the rise and fall of Cutchis as ocean traders.

Rulers favoured sea traders because they brought wealth and taxes. Coffee originated in Arabia. Ahmad Albusaid, a coffee merchant, borrowed money from local Gujarati merchants and took over Muscat in the 1720s. After that, Muscat became an entrepot trading in Arabian coffee and dates, Persian pearls and carpets, Cutchi ghee, alum, grains, cotton and blue cloth and Malabari spices. In 1785, Albusaid’s descendant conquered Kilwa in Zanzibar, and contracted Cutchi traders to collect customs. Zanzibar was the centre of trade in cloves, ivory, elephant and rhino hides (used to make shields), orchella (used to dye cloth), coconut oil and slaves. Cutchi traders settled in Oman and Zanzibar and took a major share in the trade of East Africa and the Persian Gulf. In 1873, there were 2,898  Indian traders in Zanzibar — 2,225 Khojas, 318 Bohras, 41 Memons and 314 Hindus, such as Lohanas and Bhatias. The Hindus were all adult males; they left their wives and children at home.

Goswami relates the story of Jairam Shivji, whose firm acquired the right to collect customs duties in Zanzibar from the Sultan of Oman in 1835. The Sultan signed a treaty in 1833 with some American traders who had come from Salem. He tried to get the Salem traders to extend their trading operations to Mandvi in Cutch; but the British government of Bombay was not keen, and the Rao of Cutch took fright, so the trade did not materialise. But Shivji made much money out of his Africa trade. His firm owned 200-400 slaves, and gave them uncooked broomcorn — a variant of jowar — for food.

African slave trade is millennia old. Arabs used to catch slaves in middle Africa and sell them in north Africa, or catch them in east Africa and sell them in Arabia, Persia and India. The development of plantations in the Americas increased the demand enormously. Initially, the Spaniards, the Portuguese and the British used to catch people in the Congo, Nigeria and Ghana and ship them across the Atlantic. In the course of the 18th century, demand outstripped West African supply; the French came to the ancient market of Zanzibar for slaves. Goswami devotes a chapter to  Cutchis’ involvement in slave ownership and trade, and the troubles they got into when the British government outlawed slavery.  Cutchi trade withered away with the coming of steamships, which concentrated trade on the Bombay-Suez route.

These are some of the highlights of Indira’s Goswami’s book. Though written in a scholarly style, it contains many small facts which cannot even be imagined in today’s India. She would have been better off writing about all of western India instead of just Cutch; many of the processes and connections she describes involved the traders of Gujarat and Kerala, and later the port of Bombay.  Maybe she can still do it, for she by now knows nineteenth-century sources well. The world of sailing ships was a fascinating one. Many history books have been written on it; now it is time for the traders of that time.