Book Review: Many Shades Of The Past 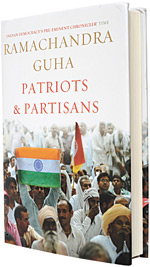 08 November, 2014
Print this article Font size -16+
Ramchandra Guha is much more than a historian. When it comes to analysing events, he uses not just his eyes and the mind, but applies his heart as well. This book is a collection of various essays that appeared in several publications, and is divided into two parts: The first part deals with India, its problems and a brief capsule of the leaders who brought the country out of the English rule to self governance. The second part is a collection of six random topics.

Thanks to the overbearing media noise, today, we are eager and ready to pass judgement on so many things, without understanding the context, the background and the history. This collection of essays helps put in perspective many of the complexities India faces today. Whether it is one of political divergence, family domination in politics or divisive fundamentalism -- there is a tale to it. Someone somewhere needs a reason to dominate or lead and a whole new ‘cause’ is born. History is important so that we understand the context and then form or express our opinions.

Since the book is a collection of previously published ‘essays’, it will not count as ‘history’. However, the title of the book is the binding glue for the essays in the first part, that runs roughly two thirds of the volume. The title is relevant; while patriotism without partisan behaviour was  common thread during pre-Independence days, after Independence, patriotism has been diluted by partisan attitudes:  language, religion or economic principles. The title also signifies why India will never find peace. Partisan attitudes cannot jell with patriotism, especially in a country that is divided by language, religions and economic disparities.

One of the six random topics in the second part talks about the closing of the Bangalore book shop (Premier), one about the family interference in the Jawaharlal Nehru Memorial Museum & Library, one about writers in more than one language, etc. There are no unifying threads here, but you could dip in to it anywhere you like.

If you are one of those who went to college in the 1970s, perhaps you will identify with four out of the six essays in the second part. Today’s history is going to be a collection of what the media thinks it wants to create. A 50,000 crowd can be hyped up as a ‘national’ event by today’s media. And you have the internet and social media to balance it out. This book is clearly for those who have an interest in present day politics, but do not have the knowledge of the past — whether it is the Nagaland problem, the China issue, the Nehru dynasty or the language issues, the essays give a good perspective.