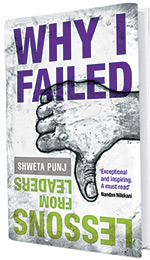 08 November, 2014
Print this article Font size -16+
The oral insulin drug was again a pionee­ring effort by an Indian biopharmaceutical company. There was hype, awe, and immense expectations around it.

But the mountain of expectations did not dwarf Mazumdar-Shaw’s spirit. Once again, she analysed what went wrong and how they could do better.

A thorough analysis showed a flaw in the design of the study. ‘Let’s be pragmatic about failure,’ she said. ‘If we want to give up this programme, we should. One should be prepared to give up.’ Mazumdar-Shaw had earlier sold off the business that she had spent 15 years building. ‘When I sold my enzyme business, I had given it whatever I could, and I unlocked very good value.’ She was ready to walk away again. In the oral insulin failure, analysis showed that the design of the clinical trial was wrong. The product was effective but the study results did not meet expectations due to the flaw in the design of the study. Biocon decided to continue it with a different study design.

Nearly a year later, in March 2012, Mazumdar-Shaw suffered another setback. Biocon’s global partner, Pfizer, and Biocon decided to part ways. A much talked about deal where Biocon was to develop and produce biosimilar versions of insulin and Pfizer was to commercialise the products in global markets, was called off rather abruptly.

Minutes after the announcement of the break-up, Mazumdar-Shaw was quoted as saying, ‘Biocon remains committed to delivering its Biosimilar Insulins portfolio to global markets in its endeavour to make a difference to diabetic patients across emerging and developed economies.’  Mazumdar-Shaw categorises the Pfizer fallout as a perceived failure. For her, calling the deal off was the only logical way forward, but for the analysts and media, it was a failure. Mazumdar-Shaw had failed to take the much talked about partnership forward. ‘Pfizer wanted us to renegotiate the deal. I was not willing to. It was early enough for us to part ways,’ she says rather matter-of-factly. There was a change in Pfizer’s business strategy and Biocon didn’t agree with it. Mazumdar-Shaw did not wait around for the cynics to settle down. In less than a year, Biocon entered into an agreement with Mylan in February 2013...”