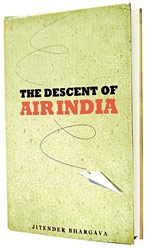 08 November, 2014
Print this article Font size -16+
The common percep­t­ion (today) is that the airline has finally emerged from the rainclouds. The protagonists cite minor increases in ma­r­ket share in a particular month or fleeting improvements in its rankings or a slight reduction in its lo­ss figure to back their pro­gnosis... but I would like to put in a word of caution here. We need to understand whether the improvement is real or perceived, whether it is temporary or long term and whether it is the result of systemic changes or the outcome of changing market dynamics. One factor that has helped Air India boost revenues, reduce losses and improve load factors has been the withdrawal of services by Kingfisher Airlines.... In 2012-13, when Kingfisher scaled down the capacity to carry only 1.2 million passengers as compared to 9.5 million in 2011-12 (it ceased operations in October 2012), IndiGo registered an increase in the number of passengers by 3.4 million and SpiceJet an increase by 1.8 million. Air India shared the third place with a relatively small airline, GoAir, with an increase of just 0.6 million passengers. However, once capacity augmentation takes place, which will be soon, with the entry of Air Asia India, the favourable market conditions will disappear. And so will the temporary rise in market share and revenue... but one should not ignore the ground realities. Unless the real picture is known, all attempts at course correction would be half-hearted-something we have seen on several occasions in the past. A fair assessment of the airline’s performance during the period would be to see if the increase in the number of passengers carried by Air India was greater than that of other airlines and also whether Air India’s revenue rose by more than those of the rest. But that has not been the case. I would like to reiterate here that, given the market circumstances, being good is not good enough. The challenge lies not in just surpassing one’s own performance but being better than other airlines in a competitive environment.

As any experienced airline hand will vouch for, any airline can raise load factors and thereby market share by offering discounted fares in the garb of promotional schemes. But unless yields go up, it will suffer financially. And yields will rise only if the product commands a fare that at least neutralises the cost of producing a seat, which, however, isn’t the case for Air India. It has repeatedly failed to improve its service and product quality as it has focused more on ­discounts and rate cuts than on increasing its ­market share by bringing about improvements in the flying experience...

There is no paucity of suggestions for Air India’s revival.... But the question is why these recommendations made by committees, consultants and employees are never implemented, given that Air India has been teetering on the brink of disaster for several years. The Dharmadhikari Committee, for instance, should have been set up in 2008 when the human resource problem was clearly evident instead of 2011... The airline tends to brush aside such comments saying its failures are largely on account of the external competitive environment and systemic weaknesses. There is, however, no explanation for the inability of its management to take decisions on issues that are within its control..., especially during its most critical years.

With permission from Bloomsbury India and BS Books