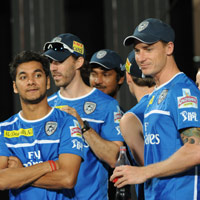 08 November, 2014
Print this article Font size -16+
The cash-strapped Deccan Chargers will remain terminated from the IPL after the Bombay high court on 18 October' 2012 set aside a status quo order passed by an arbitrator on cessation of its membership in the league.
Hearing a petition filed by the Cricket Board, Justice R D Dhanuka quashed the status quo order passed by the arbitrator appointed by the High Court to resolve the dispute between BCCI and Deccan Chronicles Holdings Limited (DCHL).
On another petition filed by DCHL against termination of the contract of its IPL franchise, the court refused to grant any interim relief, but said the legality of the termination would be decided by the arbitrator.
The court's orders on the two petitions effectively means that the termination of Deccan Chargers' IPL membership would stand, according to legal circles.
The arbitrator, retired supreme court judge C K Thakker, had last week passed an order for status quo to be maintained following which BCCI had moved the High Court in appeal.
"Arbitrator had no jurisdiction to grant status quo. On the same day (October 12), the high court had denied extension of time to DCHL to furnish Rs 100 crore bank guarantee as directed by the court on October 1," Justice Dhanuka said.
He further said the arbitrator is not "superior" to the High Court and hence cannot pass an order which overrides the high court's direction.
Criticising the plea made by DCHL before the arbitrator for status quo, the court said, "Once the High Court has rejected relief, the plea made before the arbitrator is not maintainable."
Justice Dhanuka noted that the order passed by another judge of the court on October 1 directing DCHL to furnish bank guarantee was "self operative and protective of the interests of both DCHL and BCCI".
The court also refused interim stay on termination of IPL franchise as sought by DCHL in a separate petition.
"DCHL has still not furnished bank guarantee. Hence there is no change in circumstances to grant relief to DCHL. No case is made out for interim relief for granting stay on termination. The application seeking stay is a gross abuse of law," Justice Dhanuka said.
The court, however, observed that the legality and validity of the termination would be a subject matter before the arbitrator.
The Deccan Chargers had lost its place in the IPL on October 13 after the high court stayed the arbitrator's order for maintaining status quo in the matter till further hearing, while BCCI declared that the termination of the IPL franchise stands following the court's order.
A day after ending the Deccan Chargers' franchise, the BCCI had begun the process of finding a new IPL team inviting bids in respect of 12 cities -- Ahmedabad, Cuttack, Noida Dharamsala, Indore, Hyderabad, Kanpur, Kochi, Nagpur, Rajkot, RanchI and Vizag.
BCCI Counsel Raju Subramaniam argued "IPL season 6 is going to commence from April next year. There are several good international players from the Deccan Chargers team who will be left high and dry if they are not included in the auction list".
The BCCI Counsel argued that DCHL was given sufficient time to submit the bank guarantee of Rs 100 crore as directed by another judge of the High Court. He said "Justice Kathawala had kept DCHL and BCCI's interest in mind and asked them to submit bank guarantee if they wanted to participate in the IPL 6 season."
However, DCHL's failure to submit bank guarantee of Rs 100 crore of a nationalised bank allowed BCCI to initiate action in furtherance to the termination.
Senior counsel S U Kamdar, appearing for DCHL, told the court that the company, which is in financial difficulty, should be allowed to sell the team. "To help BCCI, the company decided to go out of IPL 6 by selling the team. But the cricket board has a problem with that also," he said.
Kamla Landmarc Realty, which had shown interest in buying the IPL franchise, submitted that no prejudice would be caused to BCCI if DCHL was allowed to sell the team and go out of the IPL 6.
Ratnakar Bank, which has lent Rs 55 crores to DCHL, urged the court to give DCHL a chance so that they can negotiate with prospective buyers for the IPL franchise instead of terminating the contract. If they are allowed to sell the franchise then the rights of lenders will be protected, Bank's Counsel Anjan Dasgupta submitted.