Mumbai (Maharashtra) [India], February 24 (ANI): As Bollywood actors Ajay Devgn and Kajol completed 22 years of blissful marriage on Wednesday, several actors and their friends from the industry extended best wishes to the star couple.
Terming the couple 'beautiful people', actor Riteish Deshmukh extended greetings to Kajol and Ajay on completing a milestone.
Sending out loads of love and happiness, the 'Aladdin' actor noted in the caption to the tweet, "Happy Anniversary you beautiful people- @itsKajolD @ajaydevgn- loads of love & happiness." 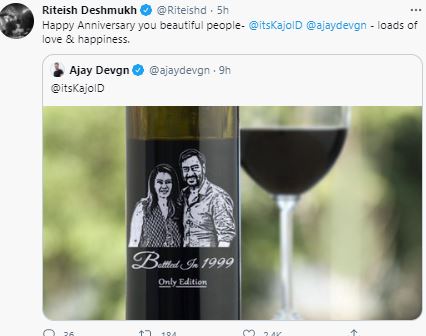 Rakul Preet Singh too sent out anniversary wishes to her 'De De Pyar De' co-star and his wife, by penning down a sweet note on Twitter.

"Happpy anniversary to a couple that set goals @ajaydevgnsir @itsKajolD ma'am! Wishing you togetherness forever," tweeted Singh.
Wishing the couple 'many more years of togetherness', veteran actor Sanjay Dutt took to Twitter and shared an all smiles picture of Ajay and Kajol. 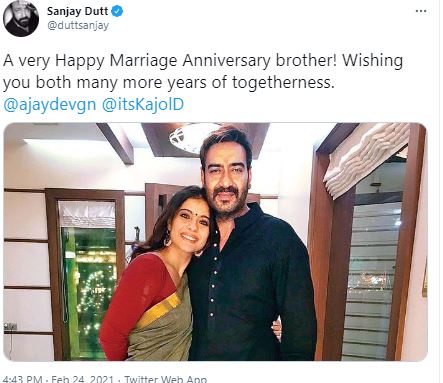 Along with the photo, he wrote, "A very Happy Marriage Anniversary brother! Wishing you both many more years of togetherness. @ajaydevgn @itsKajolD." 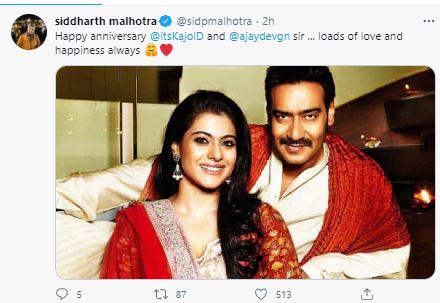 Filmmaker Siddharth Malhotra also penned down a sweet note to wish the couple a happy wedding anniversary. He noted, "Happy anniversary @itsKajolDand @ajaydevgn sir ... loads of love and happiness always."
Earlier in the day, Kajol and Ajay commemorated 22 years of their blissful marriage and shared adorable posts on social media to celebrate their wedding anniversary. The 'Dilwale Dulhania Le Jayenge' star hopped on to Instagram and shared a cute picture featuring her and Ajay as they can be seen embracing each other's company on a cruise.
On the other hand, the 'Ishq' actor shared a funny post on the photo-sharing application to celebrate his and Kajol's 22nd wedding anniversary. The couple tied the knot in 1999, and Ajay in his post made a pun on the word 'bottled'.
The 'Drishyam' star shared a picture of a bottle of wine with 'Battled in 1999, only edition' printed on the label, besides a sketch of the couple. There was a wine glass next to the bottle.
The duo was last seen together on screen in the 2020 film, 'Tanhaji: The Unsung Warrior'. They have been married for 22 years and have two kids 17-year-old Nysa and 10-year-old Yug. (ANI)