Mumbai (Maharashtra) [India], August 16 (ANI): A day after India's World Cup-winning captain MS Dhoni announced retirement from the international cricket, several Bollywood celebrities thanked the wicket-keeper batsman for treating them with his 16-year-long innings.
Actor Arjun Kapoor penned a note for the 'Captain Cool' as he mentioned that Dhoni is the only man who left him star-struck on and off the field. The 'Panipat' actor posted a picture on Instagram with the Indian cricketer and noted, "There are stars, there are legends and then there is Mahendra Singh Dhoni. The only man who left me star-struck on and off the field." 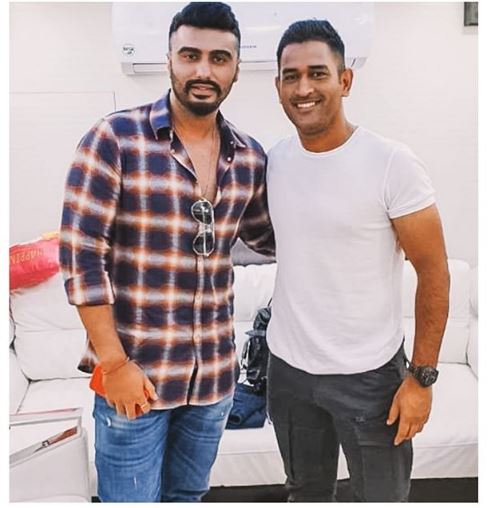 Ranveer Singh shared his memories with Dhoni and penned an elaborate note on Instagram. Singh shared a picture of his younger days and recalled memories of the picture with Dhoni. He wrote, "This little gem of a photo is one of my prized possessions. It was taken around the year 2007/08 at ND Studio in Karjat. I was about 22 years old, working as an assistant director. I took up this particular job only because the ad film featured the one & only MS Dhoni. I was overworked and underpaid, but I didn't care- I just wanted to be in His presence. " 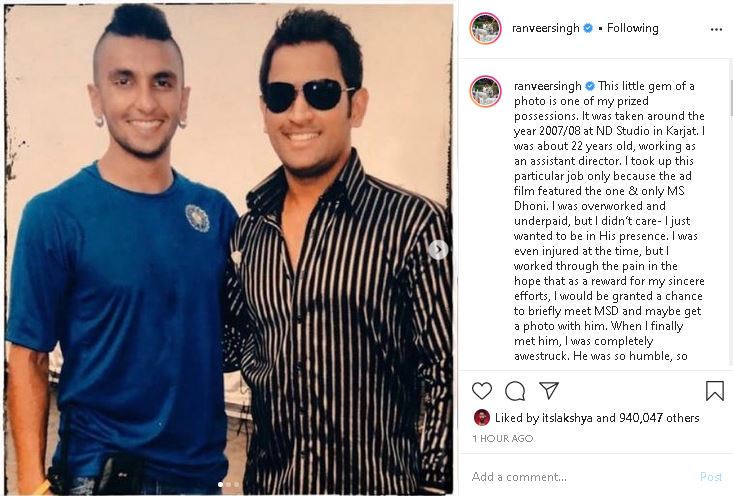 "I was even injured at the time, but I worked through the pain in the hope that as a reward for my sincere efforts, I would be granted a chance to briefly meet MSD and maybe get a photo with him. When I finally met him, I was completely awestruck. He was so humble, so down-to-earth, full of grace and exuded an unmistakable aura of kindness. My love, respect and reverence for him grew even stronger," added Ranveer. 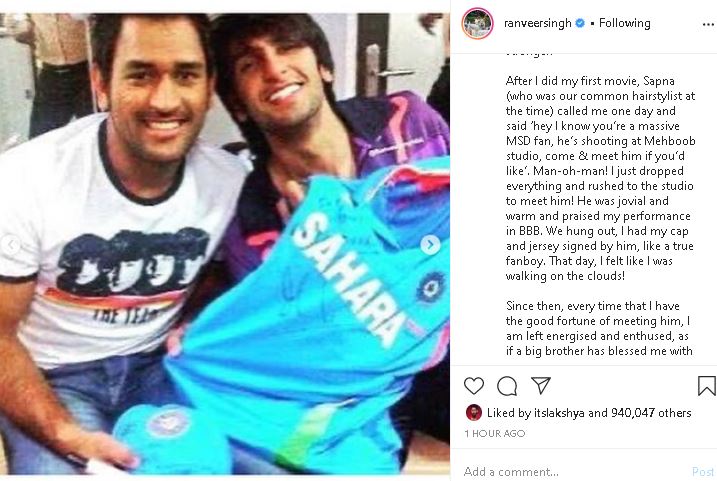 Sharing his fanboy moment, the 'Padmaavat' actor posted another picture with a blue jersey and a cap signed by Dhoni as they both pose for a capture. Along with the picture, he noted, "After I did my first movie, Sapna (who was our common hairstylist at the time) called me one day and said 'hey I know you're a massive MSD fan, he's shooting at Mehboob studio, come & meet him if you'd like'. Man-oh-man! I just dropped everything and rushed to the studio to meet him! He was jovial and warm and praised my performance in BBB. We hung out, I had my cap and jersey signed by him, like a true fanboy. That day, I felt like I was walking on the clouds!" 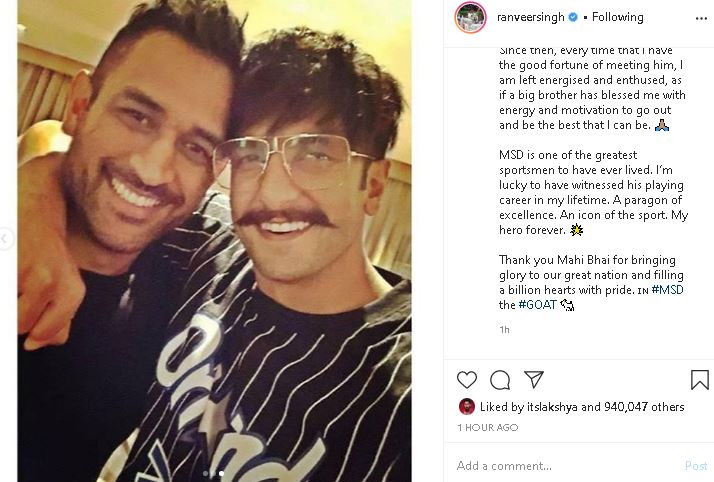 Heaping praises on Dhoni, Ranveer added, "Since then, every time that I have the good fortune of meeting him, I am left energised and enthused, as if a big brother has blessed me with energy and motivation to go out and be the best that I can be. MSD is one of the greatest sportsmen to have ever lived. I'm lucky to have witnessed his playing career in my lifetime. A paragon of excellence. An icon of the sport. My hero forever. Thank you Mahi Bhai for bringing glory to our great nation and filling a billion hearts with pride. #MSD the #GOAT ."
Recalling the memories of the picture with Dhoni, the 'Gunday' actor added, "I don't care much for taking pictures because it's something that now happens ever so often to us with selfies & camera phones but this is one I cherish. Thank You for the Memories @mahi7781 #goat."

Thanking Mahi for all the fond memories with his exceptional performances in the field, Farhan Akhar posted a note on Twitter as he wished him 'Best of luck for all that awaits.' The 'Bhaag Milkha Bhaag' actor wrote, "To not see @msdhoni in the India squad is going to take some getting used to. Thank you, Mahi, for the years of cricket glory, great captaincy and nail-biting finishes. Best of luck for all that awaits." 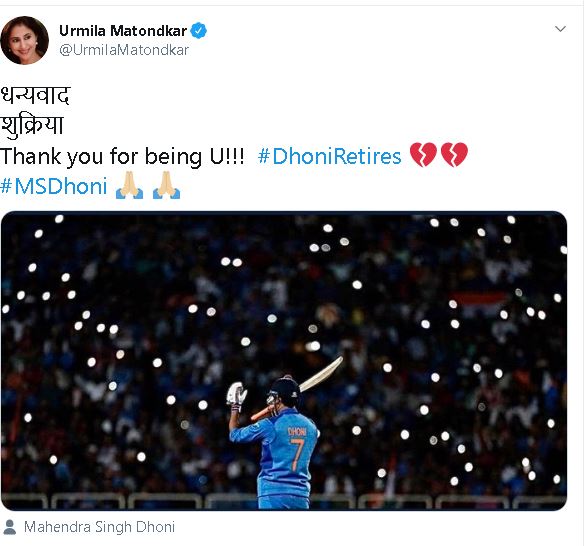 Sharing a picture of Dhoni as he bats on the field in a stadium filled with spectators, Urmila Matondkar also thanked the former Indian skipper for his tremendous contribution. She noted to Twitter, "Dhanyavaad, Shukriya, Thank you for being U!!! #DhoniRetires #MSDhoni."
The World Cup-winning captain, Dhoni, had made his ODI debut against Bangladesh in 2004. Dhoni played 350 ODIs with his highest score being 183 against Sri Lanka. He remains the only captain to win all major ICC trophies (50-over World Cup, T20 World Cup, and Champions Trophy).
In December 2014, he announced his retirement from Tests and gave a chance to the likes of Wriddhiman Saha. Dhoni called time on his Test career after playing 90 Tests, managing to score 4,876 runs at an average of 38.09. Then in 2017, he handed over the captaincy to Virat Kohli in the 50-over format. (ANI)